US committed to cutting fossil fuel use despite shale oil boom 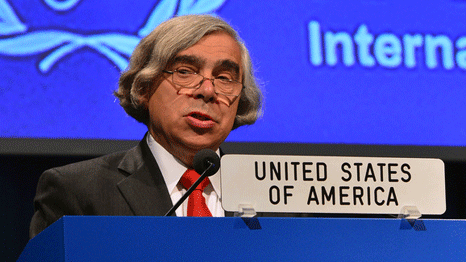 Booming levels of oil production from shale formations will not affect the country’s commitment to cutting its carbon footprint, US energy secretary Ernest Moniz has told a London audience.

In November, the International Energy Agency predicted that the US would surpass Russia and Saudi Arabia as the world’s top oil producer by 2015, and be close to self-sufficiency in the next two decades.

Alongside the recent boom in shale gas, which has been largely credited with pushing down US emissions by 12% between 2005 and 2012, oil production has soared over the last five years. In 2011, the US became a net exporter of refined petroleum products for the first time since 1949.

Moniz said efficiency, alternative fuel use and electrification were the “three prongs” the USA would employ to wean itself off oil.

He added that, historically, innovation in the field of energy production tends to arrive at a time when production is booming: “It’s a lot easier to be introducing new technologies and new players when the pie is growing,” he said.

“At the same time as we celebrate our domestic production with all its benefits, we do not lose sight of in any way our commitment to lowering our oil dependency,” said Moniz. He added that natural gas was a “bridge to a low carbon future” envisaged by President Barack Obama in his Climate Action Plan, though it would at some stage require carbon capture and storage technology.

The glut of oil has led to an increasing debate over whether the US should lift its ban on the export of crude oil, which was put in place following the 1970s decision by Arab countries not to export to America. Moniz reinforced that, while this decision rested with the Department of Commerce, “There are many, many issues that need a relook from the 1970-1975 period.”

Moniz’s perspective on the recent changes in America’s energy landscape took on particular relevance during his address to the UK audience, as the government attempts to push for a similar shale gas boom across the UK, amid concerns that this would blight the landscape and lock the country into a new source of fossil fuel.

After an impressive decline over the past few years, US emissions rose by 2% again in 2013, the International Energy Agency announced last week, as gas prices move up again, leading to a greater use of coal. This trend, said Moniz, was partly seasonal and could be attributed to the polar vortex.

“The price of gas has gone up there has been some switch back to coal, but keep this in perspective: it wasn’t long ago that we were talking about 50% coal and 20% gas in the power sector,” he said.

“Now the gas is 28%. I think there will be some ups and downs, but fundamentally the trend is towards substitution.”

He added that the impact upon the landscape would be less avoidable, as the process of fracking for the shale gas will inevitably lead to a rise of industry. A House of Lords committee heard last week from the CEO of US company Liberty Resources that the UK would need about 35 rigs in the UK, drilling around 700 wells, in order to replicate the American boom.

“Producing that amount of gas or oil is a big industrial enterprise,” said Moniz.

“You can avoid the fact that there are a lot of truck movements coming in and out and that’s something that communities and the government are going to have to deal with in terms of mitigating those impacts.”