Long-term sea level rise will be much higher, but barely studied – IPCC

Sea levels are expected to rise 2.3m for every 1C increase in temperature, the UN’s science report will warn next week 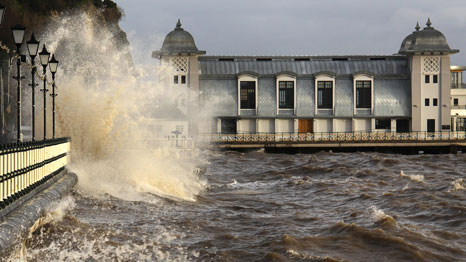 Global sea level rise over millennia will be far higher than that expected this century, but its impacts are barely studied, according to a major UN review of climate impacts, to be published next Monday.

The report, leaked online, is the second of a three-part publication by the Intergovernmental Panel on Climate Change (IPCC).

Sea level rise will continue beyond this century, regardless of trends in carbon emissions and warming, as a result of melting ice sheets.

Looking 2,000 years ahead, estimates for sea level rise are far higher than for this century alone.

Sea levels will rise by 2.3 metres over the next centuries for every 1C rise in long-term, global average temperatures, according to research quoted by the IPCC.

That compares with expected sea level rise this century of a few tens of centimetres.

Sea levels in the long term will rise by 1.3 metres above current levels as a result of warming already locked in, and by much more if carbon emissions continue, according to next week’s IPCC report.

The focus of much research to date has been the impacts of sea levels in the near term. The IPCC projected last September that these would will rise by up to around 80 centimetres this century.

Developed countries expect to be able defend important cities against even 1 metre rise, next week’s report on climate impacts will say.

“The Dutch and UK Governments have decided that they can protect urban Netherlands and London against 21st century sea level rise above 1 m,” the report says.

But sea level rise of 1 metre may be difficult to defend against more widely. One review of potential impacts this century calculated massive damage for the US Gulf Coast.

“It is estimated that a hypothetical 1 m rise in relative sea level projected for the Gulf Coast region between Alabama and Houston over the next 50-100 years would permanently flood a third of the region’s roads as well as putting more than 70% of the region’s ports at risk,” the IPCC said.

Few studies have analysed impacts of much greater sea level rise beyond this century.

Impacts should be smaller, as people have more time to prepare, but such analysis over long timescales is difficult and few researchers have attempted it.

“Few studies have considered this and, from a methodological point of view, it is difficult to look at socio-economic conditions and human responses on such large temporal scales.”

Sea levels rise both as oceans expand as a result of global warming, and as more water is added to the sea from melting glaciers and polar ice sheets.

They will continue to rise even after carbon emissions stop and temperatures stabilise because of inertia in polar ice sheets, which will melt over thousands of years for any given amount of warming.

Research into sea level rise is complicated and uncertain, since it requires an understanding both of how far the global average temperature will rise in response to greenhouse gas emissions, and how ice sheets will respond to that warming.

One research paper, cited in next week’s IPCC report, estimated that long-term sea levels would rise by an additional 0.32 metres for every decade of emissions continuing at their present rate. That was above the 1.3 metres already committed.

Another paper estimated that long-term sea levels would rise by a median 4.8 metres for a 2C rise in temperatures above pre-industrial levels. Countries have adopted 2C as a threshold target for a level of global warming which avoids dangerous impacts.