World’s poorest call for UN climate process to be accelerated 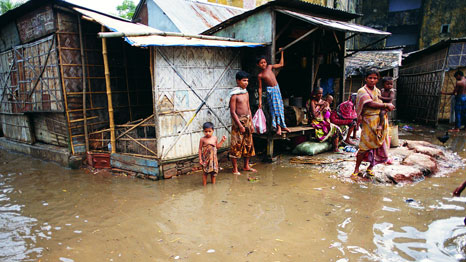 The deadline for countries to deliver new pledges on how they will tackle climate change is “too late”, according to the world’s least developed countries (LDCs).

In a document submitted to the UN’s climate body today, the world’s 49 poorest countries said that all countries need to move fast in declaring how they will contribute to a new climate change treaty to be signed off in Paris, 2015.

“The deadline and the process for delivering pledges agreed in Warsaw is too late and does not allow sufficient time for review,” they write. Countries have yet to establish a formal process to review these pledges, which compounds the problem, they add.

At the UN’s annual climate conference in Warsaw last November, a last minute decision was made to set a deadline of the first quarter of 2015 for these pledges to be submitted.

But LDCs, which include Bangladesh, Nepal, Uganda and the Gambia, are concerned that this does not leave enough time for these pledges to be examined and, if necessary, ramped up. They say that “preferably” these contributions should be submitted by the end of this year.

Prakash Mathema, chair of the LDC group, told RTCC: “Any delay in global climate action will lead to greater adverse effects, increased needs for adaptation as well as more serious residual and permanent loss and damage in LDCs and other vulnerable countries.”

But so far it looks unlikely that pledges will arrive much before the UN deadline, with the US prevented from moving any earlier by midterm elections in November this year. Of the developed nations, only the EU has given any significant indication of how its final submission might look.

A summit hosted by UN Secretary General Ban Ki-moon remains the focus for any early pledges, with heads of state invited to attend the gathering armed with ambitious new commitments to tackle climate change.

Parties have agreed that the Paris treaty, when it is signed off at the end of next year, is likely to consist of a series of “intended nationally determined contributions” put forward by each country on the basis of what they consider fair and equitable.

This is to be assessed on a number of factors, including historical responsibility for the problem of climate change and current capacity to deal with it.

But despite ongoing discussions, there is not yet a blueprint on what exactly these contributions should involve, and how the UN can ensure that country’s individual contributions will be ambitious enough.

As well as speeding up the process, LDCs have called for these contributions to be more precisely defined – a call that was echoed by both developed and developing countries during talks last week in Bonn.

Fierce divisions over the exact elements of these contributions prevented much progress from being made, with rich countries such as the US arguing that they should only have to put forward mitigation commitments, while other poorer countries argued that they should also encompass finance, adaptation and technology commitments.

The Paris treaty aims to keep the world below 2C of warming. Scientists have calculated that there is a finite amount of carbon dioxide that can be emitted if this is to be achieved.

In their submission, LDCs push for an even more ambitious agreement that aims to keep warming below 1.5C. A combination of geographical and economic factors means that poor countries such as Bangladesh and Nepal will suffer the most due to the impacts of climate change.

“These processes must be resolved quickly,” they write. “We sacrifice the survival of our countries and our people through continued stalling and lack of decisive action. For the LDCs the question at hand is their direct survival as the most vulnerable countries.”