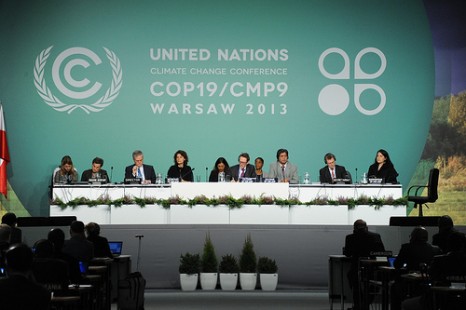 By Ed King and Sophie Yeo in Warsaw

UN efforts to develop a global emissions reduction treaty by 2015 remain on course after countries agreed on a roadmap at talks in Warsaw.

Just under 200 countries taking part in negotiations in Warsaw signed off a loose timetable for developed and developing nations to make clear what levels of greenhouse gas cuts they will make.

Described as a “compromise” by the UN body that runs the international climate change talks, the text stipulates that countries must meet in Bonn in March 2014 to start working on the finer details of the treaty.

“Warsaw has set a pathway for governments to work on a draft text of a new universal climate agreement so it appears on the table at the next UN Climate change conference in Peru,” said COP19 President Marcin Korolec.

Divisions between developed and developing countries had appeared so deep many thought the conference could end in failure, derailing any hopes of a deal scientists say is essential to avoid dangerous levels of global warming.

A large ‘huddle’ of negotiators minutes before the final session of was due to start appears to have proved decisive, resulting in two key changes in the text.

The word ‘commitment’  changed to ‘contributions, without prejudice to the legal nature’, while ‘those in a position’ to make commitments was changed to ‘those who are ready’.

The changes are believed to have been made to accommodate China and India, who were deeply opposed to accept what they see as binding controls on their economies.

Cheers greeted the announcement by the chairs that a consensus had been reached, although it’s likely the decision has simply postponed tough decisions for another few months.

EU climate chief Connie Hedegaard told RTCC she was happy with the agreement, which she says ensures global participation and a clear timeline.

“All these different elements we have them in the text. Some of them you have to look for,” she said. “I think it’s not that bad to have another word – that’s what the big fight has been about.

“We’ve worked against this backtracking, It is equal for all – it is not the old firewall. That was the main issue – can we reinstall the firewall? That was absolutely key to the European Union – no we cannot. And that we have got.”

UK climate chief Ed Davey said the pathway from Lima to Paris was now clear, arguing the UK had met its “objective” in Warsaw.

“Would we have wanted more? Yes, but this was always going to be a foundation COP,” he told RTCC. “You’ve got to make sure we’ve got the nuts and bolts, and that’s what we’ve done.”

Leading NGOs, many of whom walked out of the summit on Thursday in protest at a lack of progress, appeared sceptical over what had really been achieved.

“ADP or not real losers at #COP19 are vulnerable countries. Who will clean up this mess? Without finance loss and damage, no Paris deal,” tweeted Greenpeace UK Political Director Ruth Davis.

Jennifer Morgan from the World Resources Institute told RTCC the deal was not perfect, but perhaps the best that could be expected given tensions at the talks.

“I think it’s something to build upon and it has some good hooks to get some transparency into the system.”

Others were more critical. “The actions that have been agreed are simply inadequate when compared with the scale and urgency of the risks that the world faces from rising levels of greenhouse gases,” said Nicholas Stern from the London School of Economics.

The two-week meeting also saw the establishment of the Warsaw International Mechanism to help poor countries deal with loss and damage from flooding, droughts and heatwaves.

After heated discussions Philippines negotiator Yeb Sano made the case for the ‘Mechanism’ to be created outside rather than under the UN body relating to adaptation.

“One word, ‘under’, will forever be the difference between two paths we take,” he said in an emotional address. Parties agreed on a compromise where the wording remained on the condition it is reviewed in 2016.

Other decisions taken include the Warsaw Framework for Reducing Emissions for Deforestation and Land Degradation (REDD), backed by $280 million from the USA, EU, Norway and UK.

On finance, there was little clarity on what new funding will be delivered between 2013-2020, but $100 billion was provided for the UN adaptation fund, and $150m for the Least Developed Countries fund.