Global climate impact assessments are not factoring in negative affects from warming on crops, say scientists 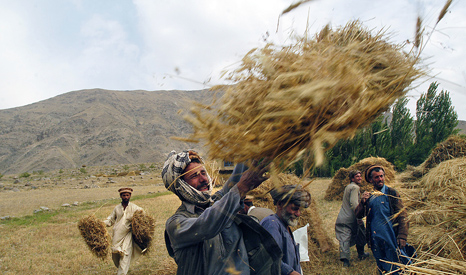 Heat waves will cut yields of wheat and maize, undermining the expected benefits from higher levels of carbon dioxide, a study has found.

The negative effects were especially serious in lower latitude countries including the United States, Mexico, south-east Asia and Australia.

Generally, the findings suggested a more pessimistic outlook for food production than previously thought, in line with other recent research.

Previous studies have only weighed the positive effect on yields of higher levels of CO2 against the negative impact of higher temperatures.

The authors examined the impacts on maize, spring wheat and soy beans, and found that more frequent heat waves cut yields for maize and spring wheat in particular.

Soy beans had a greater resistance to higher temperatures.

“Our results project maize to face progressively worse impacts under a range (of climate scenarios) but spring wheat and soybean to improve globally through to the 2080s due to CO2 fertilization effects, even though parts of the tropic and sub-tropic regions could face substantial yield declines.”

The beneficial effect of higher levels of CO2, from manmade emissions, still led to a net increase in yields this century for spring wheat and soy beans.

The latest study allowed for some limited adaptation to climate change, such as earlier sowing dates in response to longer growing seasons, but did not reflect possible advances in crop science in response to expected higher food prices, or increases in fertiliser rates.

The study concluded that only the toughest cuts in carbon emissions could safeguard maize yields.

Maize has the largest cultivated area of the three crops studied. All of the top five maize-producing nations, Brazil, China, Argentina, Mexico and the United States, saw reductions in yields.

“These losses among the top five producing countries accounting for 80% of global maize production could play a major role in future world supply of maize, with consequences for stability of international crop markets and higher risks of future food insecurity,” the authors concluded.

The beneficial effect of higher atmospheric levels of carbon dioxide tends to be higher in so-called C3 plants (for example wheat, soy beans and potatoes), than C4 plants (such as maize).

In C4 plants, photosynthesis is carried out in two difference places within leaves, an adaptation to survive low levels of CO2 and drought. C3 plants do not have this adaptation, and so thrive better when CO2 levels rise, especially during times of water stress.

The beneficial effects of carbon fertilisation are only theoretical, the authors of the latest study cautioned, given that they have only been measured in laboratories and field trials in a limited number of temperate countries.

There is a large academic literature which records that while some plants grow better at higher levels of CO2, this growth does not include proportionally extra protein, thereby reducing grain quality and diminishing any human nutrition or food security benefit.