Scientists hint at negative impacts of climate change on farming 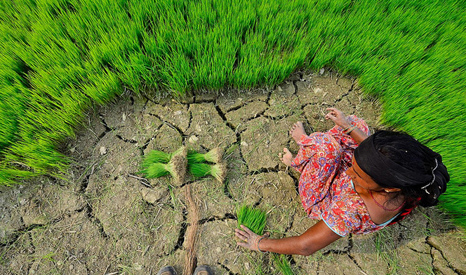 Scientists are gradually narrowing uncertainty over the impact of climate change on food production, pointing towards a more pessimistic picture.

The degree to which people can adapt to climate change is part of a wider debate about the urgency of cutting carbon emissions.

Adaptation is especially relevant to agriculture, as one of the most dangerous potential effects of climate change, alongside sea level rise.

The risk from climate change is especially great because a growing, increasingly affluent global population will require a 60% increase in global food output by the middle of the century, according to the U.N.’s Food and Agriculture Organisation (FAO).

Agricultural economists complain that the issue does not receive enough attention, given the scale of threat to global food security.

“The good news is that agriculture features much more prominently than it did in the past,” said Gerald Nelson, at the University of Illinois, in an email correspondence, referring to a forthcoming publication by the Intergovernmental Panel on Climate Change (IPCC) on the global impacts of climate change.

“The bad news is that the food chapter is still only 35 pages long. I’m arguing we need to have the IPCC do an in depth study of food security and climate change.”

The forthcoming report of the IPCC, to be published at the end of this month, will conclude that climate change will cut crop yields worldwide this century regardless of the potential for such adaptation.

“With or without adaptation climate change will reduce median (crop) yields by 0 to 2% per decade for the rest of this century as compared to a baseline without climate change,” the report finds, in a final draft summary leaked online and dated October 28.

That appears to be a more negative outlook than the IPCC’s previous equivalent report, published in 2007.

“Globally, the potential for food production is projected to increase with increases in local average temperature over a range of 1-3 degrees Celsius (warming above 1980-1999 levels), but above this it is projected to decrease,” the 2007 report concluded.

Lower yields will throw more emphasis on alternative farming responses, where recent research suggest that increasing the farmed area may be the most significant.

Two journal articles published last December tried to try to pin down the potential for adaptation, by comparing the output of a range of global economic, climate and crop production models.

The authors of both papers found that farming innovations could reduce the negative impact of climate change on yields, but that the impact was still negative.

“While just the climate change effects (result in) a 17% negative yield hit on average, the final yield hit is only 11%, again on average,” said the lead author of both papers, Gerald Nelson.

Countries would respond by ploughing up more land, increasing the farmed area by an average 11%, the authors estimated, in a paper published in the “Proceedings of the National Academy of Sciences”, called “Climate change effects on agriculture: Economic responses to biophysical shocks”.

That could not entirely compensate for the fall in yields, with an average global drop in production of major crops expected. And the authors calculated an increase in prices, which could hit the world’s most vulnerable households.

The second paper, published in the journal “Agricultural Economics”, called for more research, against the backdrop of a more negative picture generally over the last two decades.

“A summary of the literature on the effects of climate change on agriculture has witnessed a transition from relative optimism to significant pessimism,” found the authors of the paper, “Agriculture and climate change in global scenarios: why don’t the models agree”.

“In part the transition reflects gradual improvements in data availability and improvements in modelling, both biophysical and socioeconomic. But it also includes differences in underlying assumptions about adaptation implicit in the choice of modelling technique.”