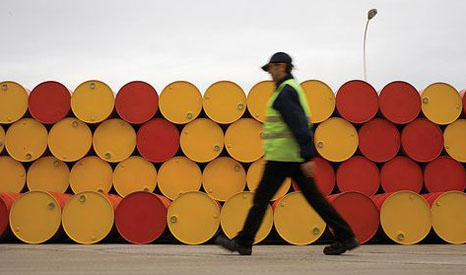 Its financial report for 2013 warns shareholders the company need to explore “economically viable” and “publicly acceptable” ways to reduce its carbon emissions, or face a downturn in business.

“Continued attention to climate change, including activities by non-governmental and political organisations, is likely to lead to additional regulations designed to reduce greenhouse gas emissions,” the report says.

It also warns that “in the years to come” governments could impose a carbon price resulting in higher energy, product and project costs.

The company also decided to suspend plans to drill for oil and gas in the Arctic due to regulatory concerns.

In a message for shareholders, Chief Executive Ben Van Beurden said the company would have to be more careful when choosing future regions to explore.

“In 2014, we will make hard decisions about our next phase of projects. Capital discipline and potential returns will be critical factors in deciding which to take forward to development,” he said.

Regulations governing the use of fossil fuels are likely to get tougher if a UN climate change deal is agreed, as scheduled, next year in Paris.

Nearly 200 countries are meeting in Bonn this week to discuss how such an emissions reduction pact could work.

Analysts at the Carbon Tracker Initiative say that annual investments of around $674 billion a year into exploring fossil fuel reserves could be at risk if an agreement is reached under the UN.

“Shell have acknowledged the general principle that constraints on carbon emissions are growing. What investors have asked for is more detail on how the company’s capital expenditure plans take that into account,” James Leaton, Research Director at Carbon Tracker said in an email.

Samantha Smith, leader of the WWF Global Climate & Energy Initiative said: “WWF and many other organisations have been calling for investors to get their money out of fossil fuels and into investments in renewable energy. So it’s welcome that even fossil fuel companies are waking up to our demands.”

Charlie Kronick, Climate Policy Advisor, Greenpeace UK, said: “The company’s new direction, if it is genuine, represents an important first step towards a rational business model. Their Arctic programme represents the shoe they left behind.”