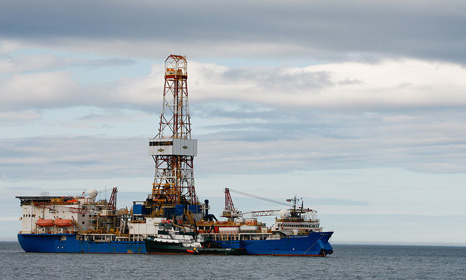 Shareholders in Royal Dutch Shell face warnings today that the company’s ambitious plans for Arctic oil and gas exploration are placing its future profits at risk.

So far Shell has spent around $5 billion exploring for hydrocarbons in one of the world’s most challenging environments, with little guarantee of success.

An analysis released today by Share Action, Greenpeace and a wider coalition of green groups says “significant questions” remain about the economic viability of Shell’s plans.

Earlier this year the company issued a profit warning amid concerns of rising exploration costs and static oil prices, an issue also highlighted by researchers behind the Carbon Bubble concept.

The ‘bubble’ represents annual investments of around $674 billion in fossil fuel reserves that analysts say cannot be burnt if the world is to avoid dangerous levels of global warming.

The study also focuses on the oil giant’s efforts in and around the Chukchi Sea off the west coast of Alaska, where there is an estimated 14 trillion cubic feet of natural gas.

Shell’s last major attempt to explore the Arctic in 2012 was hit by a series of calamities. Its Arctic Challenger safety ship failed basic safety tests on its seaworthiness, while the Noble Discoverer drilling vessel nearly ran aground.

The authors of the report say Shell has not learnt from those mistakes, and want shareholders to ask the oil giant’s new chief executive Ben Van Beurden if plans are in place to address these concerns.

They expect thousands of investors to email the company’s largest shareholder Blackrock urging them to apply pressure to abandon plans for high-cost, high-risk drilling projects.

“Now is a good time for Shell to change direction on the Arctic,” said Charlie Kronick, senior climate advisor at Greenpeace UK.

“There is a growing divide within the oil industry over the feasibility of Arctic Drilling, and other majors have walked away from what they now recognise was a bad bet.”

Five questions for Shell to answer:

-Has the company carried out an analysis of the environmental and financial worst case spill scenario and, if so, will it be publicly available?

-Does Shell have any plans to conduct more rigorous testing of its spill response equipment (particularly well containment devices) in Arctic and simulated real-life conditions. Will the company make detailed disclosures of the conditions and results of these tests?

-What impact would a reduction in subsidies and fiscal incentives currently available to the company have on its US Arctic operations?