Brazil, China and Saudi Arabia say they have no intention of discussing tough emission cuts at Bonn meeting 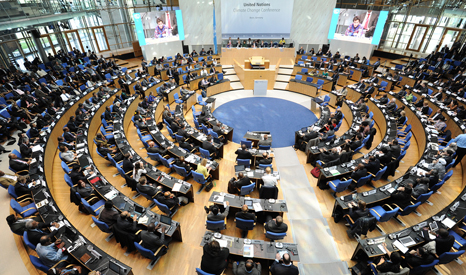 This week’s meeting is aimed at developing a framework for a 2015 treaty to cut greenhouse gas emissions, but talks this morning were marred by fierce exchanges between diplomats.

The Chinese delegation said an EU proposal to cut greenhouse gases 40% by 2030 was “ten years too late” to avoid dangerous levels of climate change, demanding the block increased efforts by 2020.

Brazil refused to talk about emission limits, saying the UK, Russia, USA and Germany had contributed more to temperature increases than “100 other countries”.

Saudi Arabia’s delegate said the projected extreme weather events as a result of climate change were the fault of states that started to develop in the 1800s.

Central to today’s debate is the notion that any new agreement should involve all countries making significant carbon pollution reductions.

But in a document submitted to the UN last week, China said that developed countries should increase their pre-2020 commitments to at least 40% below 1990 levels in order to close the so-called 8-12 gigatonne emissions gap.

UN climate talks: the toughest process in the world?

Today’s increasingly tense atmosphere in what was supposed to be a ‘workshop’ for diplomats demonstrates how delicate this process still is, and that further trouble may lie ahead this week.

One EU negotiator speaking to RTCC on condition of anonymity dismissed China’s call for tougher cuts, indicating this was part of a negotiating process that is likely to get tougher as the 2015 summit draws near.

“They’ve said it before, and I don’t think it’s realistic. I think from an EU perspective we are delivering real action,” they said.

“We’re going to overachieve our target….The EU will be contributing to closing the gap. We’re quite comfortable that we’re doing everything we need to, and that it’s 2C consistent.”

The EU has committed to reducing its emissions 20% by 2020, which it is on track to achieve.

Senior State Department negotiator Trigg Talley said the USA would cooperate with any country wishing to explore ways to cut emissions, but strongly rejected calls for differentiation between developed and developing.

Talley added:  “We don’t want to do anything that steps on countries fundamental interests in this process, but we do have to find an approach that reflects the range and continuum of circumstances that exists in the world, so it’s reflected in a Paris agreement.”