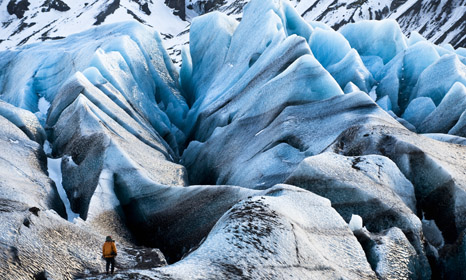 HFCs are effective refridgerants until they are released, when they become very effective at warming the planet (Pic: Chasing Ice)

Leaders at the G20 summit in St Petersberg have agreed to cooperate on cutting the use of hydrofluorocarbons (HFCs), a family of potent greenhouse gases found in fridges.

In a statement they agreed to support ‘complementary initiatives’ to phases down the consumption of HFCs and explore ‘feasible alternatives’.

Signed by 26 countries, including all major emerging economies, the agreement underlines the role of the Montreal Protocol ozone layer treaty in targeting the production and consumption of HFCs.

It also confirms the importance of the UN climate convention and Kyoto Protocol for the accounting and reporting of emissions.

Scientists say that unabated emissions of HFCs could grow to nearly 20% of carbon dioxide levels by 2050.

Known as ‘fast warming’ gases, the use of HFCs has risen by 249% since 1990, driven by a need to use gases that are not ozone-depleting.

According to Greenpeace, the most common HFC (HFC 134a) is 4,930 times more powerful than CO2 as a greenhouse gas over a 20-year period.

The USA and China also used the summit to reaffirm their commitment to work together on cutting the use and consumption of HFCs.

“We reiterate our firm commitment to work together and with other countries to agree on a multilateral solution,” the joint statement concludes.