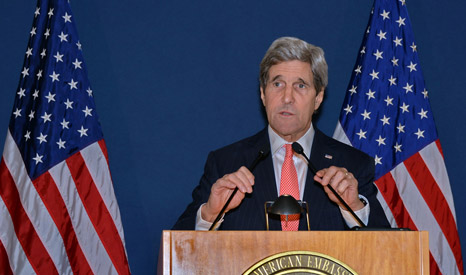 John Kerry has directed “all bureaus” of the State Department to focus on climate change.

Last week the US Secretary of State issued a new policy guidance to diplomats around the world, commanding all chiefs of mission to make climate a priority.

Stressing the issue required “elevated urgency and attention” from all embassies, Kerry said diplomats should work to boost the UN climate process, open bilateral ties with partner countries and mobilize “billions of dollars of funding.”

You can read his seven-point plan here:

I.  Lead by example through strong action at home and abroad: Making significant progress in combating climate change through domestic actions within the Department and at the federal, regional, and local level.

III.  Implement the Global Climate Change Initiative:  Undertaking a pragmatic, whole-of-government approach to speed the transition to a low-carbon, climate-resilient future, including (1) promoting clean energy solutions; (2) slowing, halting, and reversing emissions from land use; and (3) helping the most vulnerable countries strengthen climate resilience.

VI.  Mobilize financial resources:  Working to mobilize and leverage billions of dollars of funding to transform our energy economies and promote sustainable land use, as well as working to limit public incentives for high-carbon energy production and fossil fuels.

VII.  Integrate climate change with other priorities:  Better integrating climate solutions into cross-cutting challenges, including women’s empowerment, urbanization, conflict and national security, and our own management and operations.

This intervention comes at a critical time for climate policy developments in the US and internationally.

UN envoys are meeting in Bonn this week to discuss the shape of a new global emissions reduction deal, which is scheduled to be signed off in Paris next year and come into effect by 2020.

In Washington, Democrats and Republicans are currently locked in a fierce battle on Capitol Hill over the country’s long term carbon cutting policies, including EPA plans to cap power plant emissions.

Last week the House of Representatives voted to curb the reach of the Environmental Protection Agency; tonight Democrat Senators are planning an “all-nighter” to talk about climate impacts.

And in what may prove a seminal moment for his tenure as Secretary of State, Kerry is expected to make a decision on the future of the Keystone XL pipeline from Canada to Texas in the coming months.

Last week a collection of celebrities and faith leaders ranging from Academy Award-winning actor Jared Leto to Archbishop Desmond Tutu called on him to scrap the project.

The letter from Leto warned of the “imminent threat of catastrophic climate disruption”, while Tutu and 10 other high profile campaigners called Keystone a “carbon bomb”.

So far Kerry has refused to give any hints of what that decision might be.

His department is currently in a three-month national determination phase of its review, after which a recommendation on the $5.4 billion pipeline will be given to President Obama.