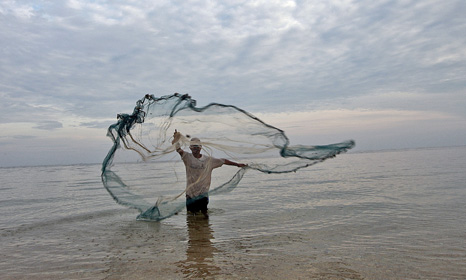 US Secretary of State John Kerry has warned of growing “dead zones” in the world’s oceans, calling for greater global efforts to protect marine life.

In his second major environmental speech this month, he said pollution, over-fishing and acidification linked to greenhouse gas emissions were stripping the high seas of life.

Kerry hinted the US could support an increase in the world’s marine reserves, urging countries to work together at the United Nations to address what he called one of the most “complex global challenges” facing the planet.

Speaking at an oceans’ conference hosted by the Economist and National Geographic in California he said: “If we want to slow down the rate of acidification on our oceans, protect our coral reefs, and save species from extinction, we have to cut down on greenhouse gas emissions and pursue cleaner sources of energy. It’s as simple as that.”

.@JohnKerry: We have to live up to our responsibilities to leave future generations the safe, healthy planet they deserve. #OceanSummit

Kerry has made climate change and environmental protection one of his main points of focus since taking office in February 2013.

In a speech in Jakarta last week he said global warming was as dangerous as weapons of mass destruction, explaining that he and President Obama had decided to make it a priority as a result.

“This is not opinion. This is about facts. This is about science. The science is unequivocal. And those who refuse to believe it are simply burying their heads in the sand,” he said.

The comments led senior Republican Senators Newt Gingrich and John McCain to call for him to resign, the latter asking “on what planet does he reside?”

And despite his desire to see greater UN efforts to address ocean pollution, Kerry admitted that continued hostility in Congress meant it was unlikely the US could ratify the Law of the Sea or the 2010 Aichi Biodiversity Targets, which call for marine protection zones to be increased to 10% of the world’s oceans by 2020.

“We’re having difficulty with this Senate in even being able to ratify a disabilities treaty that doesn’t require the United States to do anything, but helps other countries raise the standards for people with disabilities. So you can understand the difficulties of what we have in terms of the ratification process,” he said.

“We’re all connected to these and we have to find a global structure. I think the United Nations is the obvious one within which to try to arrive at an understanding of how we’re going to preserve this.”