Climate change could ‘undermine’ oceans by 2100 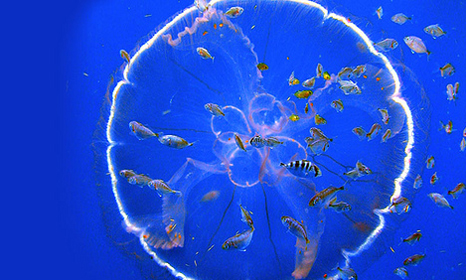 Increasing levels of greenhouse gases are likely to ‘cascade’ through marine ecosystems, leaving few areas of the world’s untouched by the end of the century.

That’s the finding of a new study by scientists at the University of Hawai’i in Manoa, published in the journal PLOS Biology.

They warn the combination of ocean acidification, depleted oxygen levels and a resulting decline in the productivity of marine organisms could affect 470 to 870 million of the world’s poorest people.

Communities that rely on fishing and tourism are likely to be worst affected by what the scientists term as ‘multiple ocean biogeochemical changes’.

“When you look at the world ocean, there are few places that will be free of changes; most will suffer the simultaneous effects of warming, acidification, and reductions in oxygen and productivity,” says lead author Camilo Mora.

Polar regions are likely to experience increased levels of oxygen and productivity, although they are likely to warm and become more acidic in time.

Of specific concern to researchers is the resilience of many marine habitats, which have not experienced significant change for thousands of years.

“Because many deep-sea ecosystems are so stable, even small changes in temperature, oxygen, and pH may lower the resilience of deep-sea communities,” says co-author Lisa Levin, a professor at Scripps Institution of Oceanography at the University of California, San Diego.

“This is a growing concern as humans extract more resources and create more disturbances in the deep ocean.”

Last week a study compiled by the International Programme on the State of the Ocean and the International Union for the Conservation of Nature suggested oceans are deteriorating faster than anyone previously thought.

It warned there is growing evidence that the oceans are losing oxygen. Predictions for ocean oxygen content suggest a decline of between 1% and 7% by 2100.

Recently the Global Ocean Commission claimed that acidification could make up to half of the Arctic Ocean uninhabitable for shelled animals by 2050.

Overfishing, pollution from ships and coral dieback were also blamed for placing added stress on sealife.