‘Climate change’ does not appear once in latest federal budget, leading to further criticism of Harper government 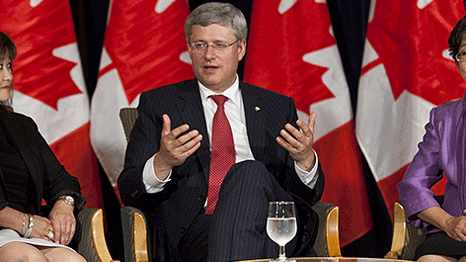 Canada makes no mention of climate change in its 427-page budget for 2014, in another sign of the country’s dwindling interest in environmental protection.

The budget, which was released to little fanfare during the Winter Olympics in Sochi, has invited accusations that Canada’s Conservative government has prioritised winning votes at the next election over the transition to a low-carbon economy.

The country’s interest in tackling climate change has declined since Prime Minister Stephen Harper’s Conservative government came to power in 2006.

Three years ago, Canada withdrew from the world’s only legally binding climate deal the Kyoto Protocol.

And at recent UN climate talks in Warsaw the government released a statement praising Australia’s new government for its efforts to repeal the country’s nascent carbon tax.

Last April the Harper government also pulled out of the UN’s desertification body, a move that caused a former UK diplomat to tell RTCC “they make [George W] Bush look like a treehugger.”

Opposition MP David McGuinty from the Liberal Party told RTCC that climate change has become a victim of a “cold, hard, crass political calculation” to win more votes at the 2015 General Election.

“The notion that climate change ought to be seen without partisanship, that it ought to be treated as a continuing brief that any government irrespective of political stripe must continue to make progress on, that is not registering with Mr Harper and his regime,” he said.

The government has completed a dramatic U-turn on domestic climate change spending since 2007, when the federal budget allocated $1.5 billion of new funding for clean energy and new technology in the provinces of the country.

In the 2012 budget, an advisoty body called the ‘National Round Table on the Environment and the Economy’ was completely abolished as part of $19.5 million cutback on Canada’s Environment Ministry.

By the time this budget was completed McGuinty said there was “nothing left to eliminate”.

Together with cutting climate policies, the budget boosts investments in the country’s oil and gas industries.

Under a chapter entitled ‘Responsible Resource Development’, the 2014 budget proposes spending $28 million on a review project that could speed up the construction of another crude oil pipeline.

Bruce Hyer, deputy leader of Canada’s Green Party, told RTCC that “nothing would surprise” him anymore regarding the elimination of environmental policies from the portfolio of Harper’s government.

“They’re the government of Big Oil,” he said, adding that Harper is “still hopeful” that President Barack Obama will approve the Keystone XL Pipeline, which will transport unrefined oil from Canada’s tar sands to the US Gulf Coast.

Many environmentalists are deeply opposed to this project because of the high carbon footprint of extracting oil from the sands and its subsequent use.

RTCC called Environment Canada for its response but the department has yet to respond to requests for comment.