A leading Canadian politician has warned that the country could be on the verge of quitting the United Nations climate talks after it announced it is leaving the UN anti-drought convention.

The decision to leave the United Nations Convention to Combat Desertification (UNCCD) was apparently made last week by Stephen Harper’s government, although CBC News only broke the story today.

Canada’s decision leaves it as the only country in the world outside the agreement.

Liberal MP David McGuinty told RTCC the decision to leave the desertification convention was a “national and international disgrace”, and said he was concerned the UN Framework Convention on Climate Change (UNFCCC) could be next to go.

“There is a danger that the government of Canada is going to continue to vacate and abandon different treaties and international efforts – there is no doubt in my mind,” he said.

“As they get closer to 2015 where they say they want to balance the budget, and they want to offer tax cuts for Canadians they will be looking everywhere to cut.

“I have pre-warned the World Bank and the United Nations that they better get their act together when interfacing with the Canadian government, because they will be poring over every dollar to those institutions and will be looking to cut.” 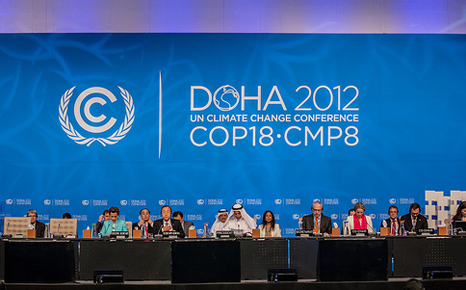 Canada confirmed it was leaving the Kyoto Protocol at the 2012 UNFCCC talks in Doha (Pic: UNFCCC)

The Harper government has won few friends in the environmental community since taking power in 2006 – “they make Bush look like a treehugger” a former UK diplomat told RTCC recently.

The administration plans to expand production at the highly polluting Alberta Tar Sands, and is lobbying hard against EU proposals to place carbon standards on oil imports from the region.

In 2011 Environment Minister Peter Kent pulled Canada out of the Kyoto Protocol, the UN treaty aimed at restricting emissions from developed countries – a decision that McGuinty says was not a shock to insiders.

“They are climate change deniers and even when they are faced in a closed room with the evidence that you can’t deny it, they have made a conscious decision that there is no political gain to be had by trying to win on the environmental front in Canadian society,” he said.

“This is a far right Tea Party regime which masquerades as a centrist regime and every so often displays its true colours through actions like this.”

A spokesman for Canada’s International Co-operation Minister Julian Fantino says the decision to leave the UNCCD was linked to the costs, which UN accounts indicate were around $140,000 a year.

The desertification convention is the smallest and least high profile of the three ‘Rio Conventions’ set up at the Earth Summit in 1992, the other two being the UNFCCC and Convention on Biological Diversity, which is based in Montreal.

Questions have been raised over the UNCCD’s effectiveness over the past decade, and it has had cashflow problems forcing it to scale back some projects.

Critics have called for it to improve its working practices at a time when the threats of land degradation – especially in Africa and parts of Asia – are becoming increasingly serious as a result of poor land management, climate change and population pressure.