As pollution levels in Beijing soar, the head of an influential research centre says the country is at risk of fatal illness 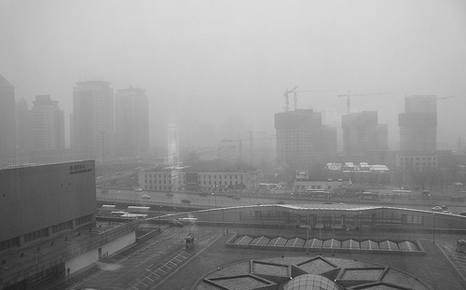 The head of the China’s leading climate change research centre has likened China’s “unbearable” air pollution to a smoker at increasing risk of lung cancer.

“China’s pollution is at an unbearable stage,” said Li Junfeng, director general of the National Center for Climate Change Strategy and International Cooperation at a conference in Beijing yesterday.

According to Bloomberg he added: “It’s like a smoker who needs to quit smoking at once otherwise he will risk getting lung cancer.”

Air pollution is Beijing is so bad that it is considered a serious risk to human health. In November last year, an eight-year-old girl became the youngest child ever in China to be diagnosed with lung cancer.

His comments came as Beijing faces some of its worst ever pollution, causing an ‘orange’ pollution alert to be issued in the city. The alert was issued on Friday, and remains in place today, with a further three days of hazardous pollution expected across the city.

It is the first time that such a warning has been issued since the four-tier system was introduced last year as part of the effort to help Beijing tackle its notoriously bad air quality.

The pollution means young people and the elderly have been advised to stay indoors, while residents are being urged to leave their cars at home. Only under a ‘red’ alert will the city authorities pull cars from the roads.

The Chinese capital has been swathed in a fog of PM2.5 since Friday. These particles are less than 2.5microns in diameter and are a serious threat to human health. The US Environmental Protection Agency deems any reading over 300 to be hazardous. Over the past couple of days, levels have frequently exceeded 400.

Breathing muck. This is smog over Beijing today. Hazardous to breathe. Mask recommended if you go outside. pic.twitter.com/CMYUr1ipDa

Air quality problems have caused outrage among Beijing residents, where the problem is at its most acute. Thick pollution led to an unusually critical tone in the state-owned China Daily, which is normally wary of attacking the government.

The pollution is largely the result of vehicles and coal, which emits carbon dioxide alongside the PM2.5 particles, causing the planet to warm. The deterioration of China’s air quality has occurred alongside the boom in the country’s economy, as the government pursued a model of growth at all costs. 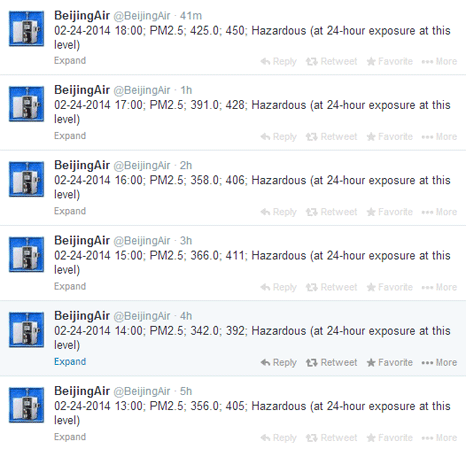 Readings by Beijing Air were almost constantly ‘hazardous’ over the weekend

But as anger simmers among the Chinese public, the government is undertaking measures to tackle air pollution.

According to Reuters, China’s Ministry of Environmental Protection said on Sunday that twelve teams of inspectors would head to Beijing along with Tianjin and the Hebei province to examine how authorities are responding to the crisis.

China will need to figure out how to reduce its coal dependence if it is really committed to cleaner air. Currently, the country produces 45.3% of the world’s total coal.

Production is still growing, although according to figures released in January by the China National Coal Association, the rate of consumption slowed in 2013.

A report released last week by WWF said that China had the potential to use renewable energy for 80% of its power generation by mid-century, and could do so more cheaply than relying on coal.

This would rely on high carbon prices through emissions trading schemes and rigorous standards of energy efficiency, said the group.