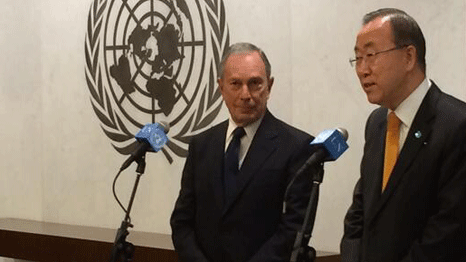 Michael Bloomberg’s experience as New York mayor makes him the ideal candidate to “serve humanity” as he joins a growing squad to UN envoys working to secure a climate change treaty in 2015.

This is the view of UN General Secretary Ban Ki-moon, who hailed Bloomberg’s “experience, his global visibility and global leadership” in New York on Friday.

Ban appointed Bloomberg as UN Special Envoy for Cities and Climate Change in January – a decision which was welcomed by UN climate chief Christiana Figueres, who called him “the best communicator of the need to act quickly.”

“Mayor Bloomberg is much better known for his strong stewardship on environment and climate change. He has made this great city of New York a carbon-free city,” Ban said.

“That is why I have asked him, after his retirement from Mayor, to serve humanity, to work for humanity, working as Special Envoy of the United Nations for cities and climate change…We need such dedicated and visionary leadership when we really try hard to address the climate change phenomenon.”

He added that Bloomberg’s work would be key in securing a “global, legal climate change agreement” in Paris in 2015.

As mayor of New York, Bloomberg undertook hundreds of initiatives to improve the sustainability of the city under a strategy called PlaNYC.

Published in 2007, this project created hundreds of acres of new parkland, reduced greenhouse gas emissions 13% on 2005 levels and transformed 30% of the cities yellow taxis into a “green” fleet of hybrid and clean diesel vehicles.

In the wake of Hurricane Sandy, which tore through New York in 2012, Bloomberg created a US$19.5 billion rebuilding plan, which would incorporate the risks of climate change into the new design.

Bloomberg was also president of the C40 Cities Group, which brings together mayors from across the world to share ideas about tackling climate change at a local level.

Ban said that he would be counting on Bloomberg in the run up to UN meetings in Paris in 2015, where the world has agreed to sign off a climate change treaty, as well as the summit of world leaders that he will host in New York this September.

He said: “Now we would like to use his global leadership and power in, first of all, making our UN climate change summit meeting in September a great success, and most importantly, we need to have a global, legal climate change agreement by 2015, next year.”

By drawing attention to cities’ progress in fighting #ClimateChange we’ll show nations how much they can accomplish.