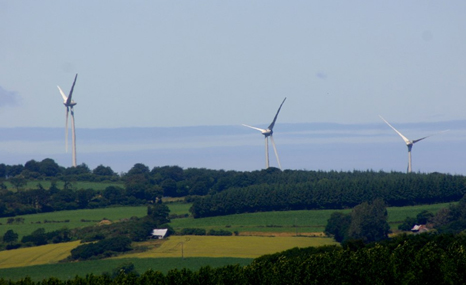 European governments may have to grapple with growing grass-roots opposition to wind energy projects and new overhead power lines as they thrash out plans on renewable energy quotas as part of the EU’s climate and energy package.

European Union policymakers proposed last month that 27% of the 28-nation bloc’s energy should be generated from renewable sources by 2030, which is equivalent to 45% of power generation being produced from wind, solar and biomass, meaning that a growing number of European voters will be affected by a transition to low-carbon energy.

In Bavaria, one of Germany’s richest states, residents have protested against new transmission lines being built to connect wind farms with areas of high power demand

A separate 800-mile corridor of overhead lines and giant pylons running from Germany’s windy north to the energy-hungry south will likely have to take account of the concerns of residents and farmers.

“It’s definitely a growing issue, particularly where local residents feel that they don’t get a fair share of the economic benefits from wind and that governments and power companies are deaf to their concerns,” said Dorothee Landgrebe, an analyst with the Green Party-affiliated Heinrich Boell Foundation in Germany.

Although Germany’s Energiewende, or transition, has enjoyed broad support from voters, the high household energy bills that are funding the move from nuclear to wind and solar power could mean that future growth in renewables becomes an increasingly difficult sell politically.

“The solution, in Germany at least, is likely to come from possible reforms that could mean smaller wind farms that are controlled in part by local residents and spread out more widely across countries, meaning less need for huge overhead electricity pylons,” said Landgrebe.

But that would mean smaller windfarms in many more locations, increasing the number of permits required by developers of projects.

The issue might be even more acute in smaller EU member states that have ambitious plans to ramp up the use of the renewable energy, as local campaigners pit themselves against policymakers and power companies.

In Ireland, social media is fuelling not-in-my-backyard opposition to gigantic turbines that will generate power for export by subsea cables to the UK, helping its larger neighbour meet renewable energy commitments.

The Irish government wants a big expansion in its wind industry to create jobs and reap the proceeds of power exports, and at the same time reduce its reliance on imported gas and carbon-intensive peat fired power stations.

But local campaigners in Ireland say they are being inconvenienced by the noise and size of the turbines, and that landowners are pocketing too many of the proceeds from the country’s wind energy boom.

Opposition to new new pylons is likely to be stronger than protests against wind turbines, say experts, potentially thwarting EU plans for a $100-billion euro pan-European supergrid that would help solve the problem of intermittent supply.

“There’s a much lower degree of acceptance of new pylons because they are viewed as being a much bigger blot on the landscape and some communities suspect they are a cause of ill health,” said Geraint Eliss, a specialist on wind projects with Queens University Belfast.

He added: “Its going to be a major problem for marine energy projects such as offshore wind and wave power, which will need to connect coasts with large, and relatively faraway areas of demand.”

In the UK, government says measures are in place that enable local communities to benefit from wind turbines in their area and that local councils have the final say.

But opposition to further expansion of onshore wind  in Prime Minister David Cameron’s Conservative party is thought to be partly behind a stronger push for pricier offshore wind, nuclear, and fossil fuel power plants capable of capture and storing carbon emissions.

In 2013 Around 13% of the EU’s electricity generation came from wind, the European Wind Energy Association said last week, while and turbines accounted for around 32% of newly installed capacity last year, with solar taking a similar share.

A meeting of EU governments next month will kick off talks that are likely to last a year on the 2030 measures, during which countries are expected to detail how much extra renewable energy they can use by the end of the next decade.

The European Commission has proposed an EU-wide target of 27%, while the European Parliament in a non-binding vote last week said the threshold should be 30% based on individual country targets, rather than non-enforceable proposals.

Supporters of renewable energy say robust, legally-binding country targets on renewables are essential if the EU is to retain and create jobs in green energy, while environmental groups want ambitious thresholds so that Europe can meet overall greenhouse gas reduction targets.