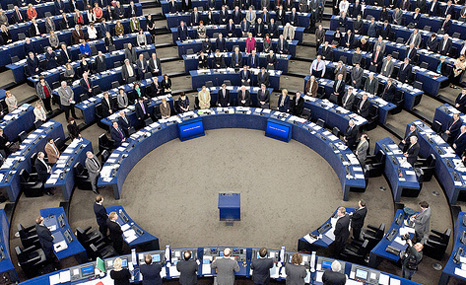 The European Parliament on Wednesday voted for 30% targets on renewable energy and energy efficiency, tougher than what was proposed by EU policymakers last month.

In a vote of the full sitting of the European Parliament in Strasbourg, MEPs voted for a law that would require 30% percent of Europe’s energy to come from renewable sources by 2030, and for energy efficiency also to improve by 30%.

MEPs voted to back the European Commission’s proposal that greenhouse gases are cut 40% from 1990 levels by the end of the next decade. The views of the EU Parliament on climate and energy will be considered in a meeting of 28 EU member state governments next month.

“If we have a broad energy mix with greater energy efficiency, this is the best option to reduce to reduce greenhouse gas emissions, to encourage new technologies and innovation, create jobs, and change our economies into greener economies. This is why we need three binding objectives,” said Anne Delvaux, one of the co-rapporteurs.

“If we double the emission reduction target after 2020, it is not realistic. It is a road to reduce the competitiveness of European industry,” said Szymański, co-rapporteur from the industry committee, who withdrew his name from the report that was adopted.

Many welcomed the vote for tougher targets on renewable energy than those presented by the European Commission. In January, commissioners proposed an EU-wide renewable energy target of 27% without binding national targets, and omitted a figure for energy efficiency.

“European Parliament has rejected the Commission’s one-legged 2030 policy,” said the European Renewable Energy Council, a lobby for wind and solar power, in a tweet.

MEPs voted in favour of binding renewable energy targets to be implemented through national thresholds.

This would be based on each member state’s energy mix and potential to use greater amounts of wind and solar.

Some countries, such as the UK, have opposed binding, country-level renewable energy targets because they want to be able to use nuclear, CCS and new gas-fired power stations in their energy mix in future decades.

Coal-intensive countries such as Poland also don’t want to have to adhere to targets on the use of more expensive renewable energy. Heavy industry has lobbied for a greenhouse gas reduction target to be weaker than 40%.

The Parliament’s vote in favour of a joint report from lead MEPs or ‘rapporteurs’ in the environment and industry committees is the assembly’s major input on the 2030 package ahead of tough negotiations among governments that are expected to last at least a year.

In the first half of 2015 EU governments will have to hammer out agreement among themselves before the Commission can draft a workable document, which could take until 2016 or 2017 before it becomes law.

The EU is on course to meet targets to cut greenhouse gas emissions 20% by the end of this decade, and use renewables for 20% of its energy by 2020, but looks set to fall well short of a requirement to improve energy efficiency by 20%.

Green groups want tough 2030 targets across the board, so that Europe is put on a path to cut greenhouses 80-95% by 2050 from 1990 levels, and encourage deep cuts from other large emitters.