China’s capital saw in the New Year with slightly less of a bang this year, as chronic air pollution turns citizens off from traditional firework displays 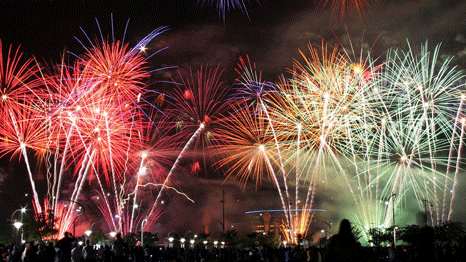 Firework sales in Beijing slumped by 38% over the Chinese New Year, amid growing concerns about the city’s air pollution.

Statistics released by Beijing local government reveal that residents bought 19,500,000 boxes of fireworks between 30 January and 4 February during the Spring Festival celebrations, which ended yesterday – down by 37.7% from the previous year, Beijing’s municipal public security bureau said in a statement.

The custom of setting off fireworks and firecrackers during the Lunar New Year period is a centuries-old tradition in China, supposed to ward off evil spirits and bring good luck.

But a year of unprecedented levels of air pollution in Beijing has dampened enthusiasm for the city’s spectacular displays.

Toxic smog, and in particular the fine PM2.5 particles that pose the biggest danger to human health, regularly reach unhealthy levels in Beijing,  have prompted residents to wear facemasks and schools to close.

Changhua Wu, China director at the Climate Group, told RTCC this has led to a debate about the New Year fireworks.

“Fireworks have a long history, and it has been the tradition as part of the celebration of the Chinese Lunar Calendar New Year.

“But because of the air pollution, not everyone agrees with it. There’s an emerging consensus in society that we need to take into consideration the air quality issue because people are worried about the health impact.”

Fireworks release dust particles and other toxic compounds that cause breathing difficulties, compounding the problem of toxic pollution in China, which is caused mainly by the burning of coal for power generation, steel-making and district heating.

Anger over the problem of air pollution is driving efforts within China to reduce greenhouse gas emissions, of which they are the world’s largest emitter. The country has been experimenting with carbon trading schemes in various cities, including Beijing and Shanghai, which they hope will form the basis of a nationwide programme in 2015.

China’s economic growth over the past decade has been accompanied by booming emissions, which will be relevant when states come to sign off a global climate change treaty in 2015. A recent study found that China now has the second highest historical emissions after the United States.

Prior to the celebrations, municipal governments across China ran campaigns to encourage people to cut their use of fireworks in order to keep air pollution to a minimum.

In Shanghai, the number of authorised firework sellers was reduced by 400, while the government in Beijing used the media to encourage citizens to bring a “breath of fresh air” to the city by curbing their use of fireworks.

No fireworks allowed at the Beijing cathedral pic.twitter.com/oIIjn9GoGW

But some objected to the measures, protesting that pollution from fireworks is a short term problem compared to the real root of China’s air pollution problems – coal.

“Air pollution is indeed a problem, but fireworks are just one contributing factor, and their use is a tradition worth preserving,” wrote blogger Mitch Blatt on website ChinaHush.

“Fireworks are a special cultural heritage of China and one that I, as a foreigner who enjoys experiencing Chinese culture, would hate to see disappear.”

The drop in sales appeared to have some effect.

Beijing air-monitoring stations showed that PM2.5 levels in the city spiked at 479 micrograms per cubic metre at 1am on 31 January, down from 1,486 in 2012’s New Year.

But at 479 micrograms, the air pollution was still considered “hazardous”, and is 20 times the level that the World Health Organisation considers safe.

Alongside government efforts to cut firework-related pollution, the reduction is result of a “perspective change” from Beijing residents, said Wu, who believes the conversation around air pollution and fireworks has grown due to the use of social media.

“People are more worried about air quality and their health. I have a 13-year-old boy and we didn’t buy any fireworks at all this year. It’s a choice, consumer choice, basically, how much you do.”

She added that environmentally friendly fireworks, although more expensive, could help to further reduce the problem, and that their use could be scaled up in coming years to “maintain the spirit of the holiday celebration but in the meantime without damaging the air quality.”