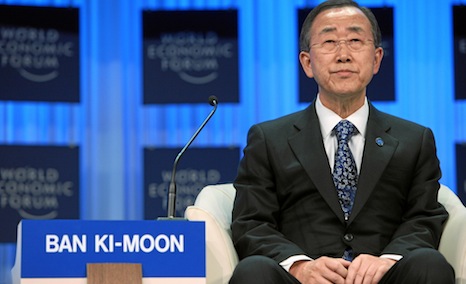 Ban Ki-moon’s global warming summit in September “has to be a success”, according to the UK’s top climate diplomat, who warns it is critical leaders of the world’s top carbon polluters attend.

So far no world leader has committed to the meeting, despite it taking place on the sidelines of the 2014 General Assembly, when heads of state are typically in New York.

“The simple thing is that no one wants to go as a head of state unless they have a clear announcement they want to make,” Sir David King told RTCC, adding that each leader is currently waiting for others to confirm their attendance before announcing their own decision.

The Secretary General announced the meeting in September 2013, calling upon heads of governments and businesses to bring ambitious emissions reduction pledges. The timing is critical, as the UN is currently working on plans for a global emissions reduction deal in 2015, set to be signed in Paris, which requires all leading economies to make significant carbon pollution cuts.

An official at the Secretary General’s office told RTCC they expected leaders to be at the summit, but could not confirm any names. “No Head of State or dignitary has confirmed attendance to the Climate Change Summit that will take place in September,” they said.

The office of UK Prime Minister David Cameron refused to say if he would be there due to “security reasons”.

Since his September appointment, King has been travelling around the world to try to extract promises from leaders that they will be at the summit. To date, he says he has received indications rather than promises. “We can set up quite a long list of heads of states that are likely to be there,” he said.

“If I was a guessing person, I’d say Peru, Mexico, United States, Britain, Germany and France … So I don’t want to sound pessimistic. I think with that little grouping you’ve already seen the dominoes fall. I think it’s going to happen. But I’m not going to rest until it has.” Without China, Brazil, India and Japan, the summit risks being a “non event”, he added.

On Tuesday, the minister of state of the United Arab Emirates, Sultan Al Jaber, announced that he would host a meeting in Abu Dhabi in May to ratchet up ambition before the summit.

At a meeting in Warsaw in November, the UN said that countries “who are ready” must submit their pledges during the first quarter of 2015—nine months before the final treaty is scheduled to be signed off in Paris.

This leaves little time for the promises to be reviewed and potentially ratcheted up. Ban’s summit in September therefore provides a “sounding board” for leaders to push one another for tougher emissions reduction targets before the official deadline in March the following year, said King.

“I see it as a key part of the process precisely because the UNFCCC failed to agree on an earlier date for announcing nationally determined contributions,” he said. “This meeting has to be successful.”

The UN has no process in place for ensuring the nationally determined contributions will be enough to limit global warming to safe levels, he added —”a missing piece in the architecture”—and it has not allocated enough time to work through any shortfalls.

“There is a real need to see that a significant number of heads of states come to the meeting, and so that in the first instance has to be the most important issue: getting enough people there.”