Economic growth and millions of jobs at risk if German leader does not stamp authority on negotiations, say campaigners 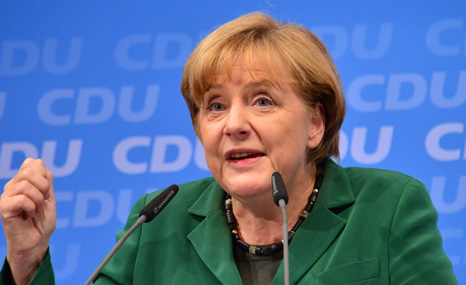 Millions of green jobs across Europe are under threat if Angela Merkel does not get a grip of the region’s climate and energy policies.

That’s the view of a coalition of 23 NGOs and lobby groups who have written to Germany’s Chancellor warning that a proposed 40% reduction in greenhouse gas emissions by 2030 is too low.

“With the European Council on climate and energy less than two months away (20 – 21 March), we are particularly concerned by the lack of climate leadership in Europe,” a letter sent to Merkel’s office says.

It adds: “We therefore ask you to step up and create a new dynamic at the European and international level in the lead up to the Paris Climate Summit.”

The NGOs say that 40% target could place an “artificial cap” on renewable energy and energy efficiency investments, threatening 100,000 jobs and the creation of “millions more.”

The letter adds Merkel should push for a 55% cut in emissions “to be in line with science” and trajectories to avoid warming of beyond 2C, a level deemed as dangerous.

The EU Commission presented its 2030 climate and energy package at the end of January, after fierce internal arguments over the levels of emission cuts and renewables it could adopt.

Sven Harmeling, Climate Change Advocacy Coordinator at CARE International, which backed the letter, says a swift intervention from Merkel is essential to ensure the EU does not backtrack on its wider climate commitments when national leaders meet in Brussels next month.

“Merkel is an important political player in the EU, and maybe the key person,” he told RTCC. “The coalition agree between the two parties has the basis for offering more than the EU Commission has proposed, with its terminology at least 40% emission reductions.”

Another signatory, Eva Filzmoser from Carbon Market Watch, says Merkel can be a “champion” for tighter carbon pollution regulations. “If anyone, the eyes were on Germany to propose more. It’s important Germany knows it’s not only German NGOs looking at their own government, but they see their national government to have a responsibility for Europe,” she told RTCC.

A former environment minister who helped broker the Kyoto Protocol, Merkel has long had an interest in climate change. The new governing coalition she entered into with Social Democrat Sigmar Gabriel promised to deliver ‘at least’ 40% emission reductions, although analysts say this will be difficult without a fully functioning EU emissions trading scheme.

The level of support among European governments for tougher carbon reduction and renewables targets is unclear. Poland and the UK are known to oppose renewables targets, seeking space to invest in shale gas and nuclear, while Ireland, France and Italy backed wind and solar goals.

Denmark’s new Foreign Minister Martin Lidegaard says his country will be pushing for stronger legislation at the next leaders’ meeting, saying the agreement on the deployment of clean energy was “too compromised.”

He added:  “We were happy that we got a binding target. We just want to ensure that it will actually be binding and we would like a more ambitious level.”

Reports from Brussels suggest Oettinger has been warned after his comments criticising the EU’s 2030 package.

“His speech was absolutely intolerable,” a ‘senior industry source’ told news agency Euractiv. “The style was unacceptable, and its content undermined the Commission’s energy policy commitment.”

EU negotiations over its 2030 energy and climate pathway have been watched closely around the world.

The bloc has in the past presented itself as a leader in carbon cutting policies, and whatever targets it sets will be seen as a benchmark for other national pledges at UN talks aimed at developing a global emissions reduction deal.