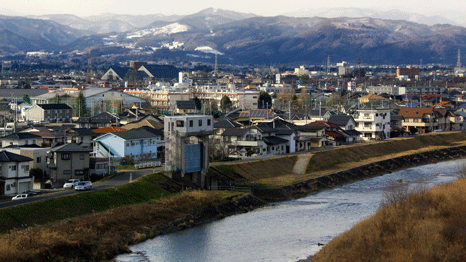 A tsunami caused Japan to shut down its nuclear reactors in 2011 (Source: Flickr/JuhaOnTheRoad)

The Japanese province of Fukushima has pledged to switch to 100% renewable energy by 2040, turning its 2011 nuclear disaster into an opportunity to tackle climate change.

The mayor of the region, which has a population of about two million people, hopes that community energy schemes will wean the region off fossil fuels completely in just over 25 years’ time.

Energy will be generated locally through community energy initiatives and will provide a clean and self-sustaining source of heat and electricity throughout the area.

A coalition of green energy groups welcomed the decision at a Community Power Conference held in Fukushima this week.

The scheme is regarded as a positive step to embrace renewable energy in Japan, where the national government remains pro-nuclear, despite widespread distrust of the technology and its regulation.

“The Japanese government is very much negative,” said Tetsunari Iida, director of the Institute for Sustainable Energy Policies in Japan. “Local government like the Fukushima prefecture or the Tokyo metropolitan government are much more active, more progressive compared to the national government, which is occupied by the industry people.”

A recent survey found that 53% of Japanese people wanted to see nuclear power phased out gradually, and 23% wanted it scrapped instantly.

But Japan’s prime minister Shinzo Abe remains determined to restart the country’s nuclear power stations after the 2011 disaster forced them all to be closed down. This meant Japan had to rely more heavily on fossil fuels, including coal.

Nuclear power is seen by some as part of the solution to climate change, as it generates large volumes of energy without emitting carbon dioxide. But the fact that it generates dangerous radioactive waste makes it a controversial option.

Currently, Fukushima derives 22% of its primary energy from renewable sources. According to Stefan Schurig from the World Future Council, the price of clean energy is no longer an obstacle in making the transition away from fossil fuels.

“The cost of renewable energy has declined massively, so they’re more or less competitive with conventional types of energy,” he told RTCC.

A US$ 226 million floating offshore wind farm project is already in motion off the coast of Fukushima. One wind turbine is already delivering 2 megawatts of energy. By 2020, the goal is to have 143 turbines generating 1 gigawatts of wind energy, making use of the region’s considerable natural resources.

Iida told RTCC that local and metropolitan governments have a more progressive attitude towards climate change than at the central level, where he says industry maintains its stronghold.

The Japanese national government stunned other delegations at the UN’s climate change negotiations in Warsaw last November when it announced that it intended to backtrack on its previous commitment to reducing emissions by 25% on 1990 levels, to a 3.1% increase.

Iida added that community power schemes provided a sense of “local ownership, local participation” and that the nuclear disaster had changed the way people thought about energy.

He said: “Fukushima people are encouraged to set up community power all over the area.”

A 100% renewables target is ambitious, not only domestically, but also globally. This week, the EU set its own tentative renewables target at 27% for 2030 as part of a package that many viewed as too limited in its scope.

Nagano, the Japanese prefecture which hosted the Winter Olympics in 1998, has also pledged to switch to 100% renewable energy by 2050.

Schurig said: “There’s still a long way to go in Japan because the official government position is still very pro-nuclear, so it would be naïve to say this is an easy way, that we just need to set an example and other regions will follow.”

But he added that it was a positive step forward for an area that seemed hopeless following the devastation caused by the nuclear disaster.

“It’s one of the very few chances this place actually has,” he said. “I felt a very real hopelessness to cope with the situation, but also we need to change something, we need to look into the future.

“In setting this target, the mayor provides his people with a  new vision, with a positive spin that it the only possible strategy to convert this negative connection with Fukushima and spin it into a positive tone.”