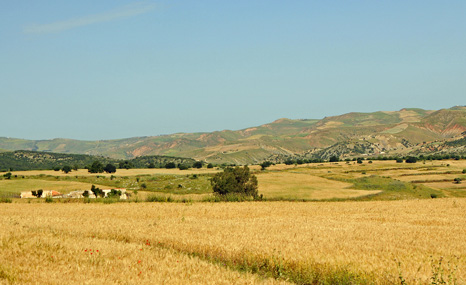 Predicted temperature rises will place huge pressure on Tunisia’s farmers in the next 30 years (Pic: CC)

Tunisia has become only the third country on the planet to embed the importance of addressing climate change into its constitution.

The National Constituent Assembly passed the text earlier on Monday, with support from 168 MPs.

The constitution, which has been widely acclaimed as one of the most progressive in the region, obliges the state to “contribute to the protection of the climate … for future generations.”

It marks the start of a new era for the country three years after President Zine el-Abidine Ben Ali was ousted in protests that marked the start of what was called the Arab Spring.

Before today only Ecuador and Dominican Republic had included climate change in their constitutions.

Speaking to RTCC from Tunis, MP Dr Dhamir Mannai, who proposed the inclusion of a climate amendment, said legislators were concerned about the potential impacts a warming world could have on Tunisia.

“This opens the door for legislation for both the environment and climate protection,” he said.

“As MPs we wanted to tackle the issue head on, and then tackle it through climate legislation, and hopefully put us in a position where we can demand that other countries do the same.”

In statement supplied by the Climate Parliament NGO, fellow MP Hasna Marsit added: “As the first such initiative after the Arab spring, it represents a break from the inadequate policies of the past regarding sustainable development, and the first step towards building an effective climate policy which combines long term vision with a comprehensive and regionally-blind approach to sustainable development.”

Water shortages and temperature rises are a particular concern in the Middle East and North Africa (MENA) region, increasing the chances of droughts.

According to climate models run by scientists who contribute to the UN’s IPCC reports, an estimated 80 million to 100 million people could be exposed to water stress by 2025.

Some worst-case scenario models suggest average temperatures could climb 4C by mid-century and 6-8C by 2100.

This could place added stress on a country that is slowly rebuilding after the chaos of the Arab Spring, which analysts say was in part caused by spiralling commodity prices in the region.

Tunisia also has vast potential for the production of solar energy. It plans to raise the share of renewables in its electricity mix from 5% in 2014 to 25% in 2030.