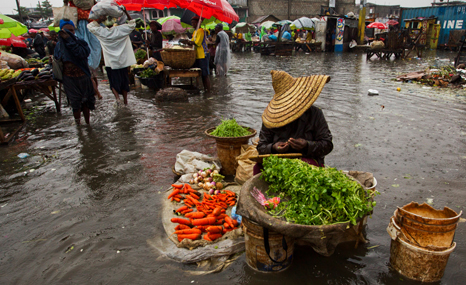 The European Commission’s decision to propose a binding target to reduce carbon emissions 40% by 2030 has been welcomed by the UN’s climate chief.

Christiana Figueres said it meant the EU was “on track”, adding on Twitter it was a “positive signal for meaningful 2015 agreement.”

The EU’s announcement marked the start of an internal process for member states to work out its energy and climate strategy for 2030 and beyond. But it also sent important signals to a global audience, keen to see how far the self-anointed ‘leaders of climate ambition’ would go to live up to that reputation.

EU climate chief Connie Hedegaard hailed 40% as “ambitious”, while her team talked up the renewables target of 27%, pointing to the inclusion of the words “at least” as evidence the bloc could go further given the right conditions.

Quamrul Chowdhury, Bangladesh’s lead negotiator at UN climate talks, told RTCC news of a 40% target was “welcome” but stressed it was far lower than many in the Least Developed Countries community had hoped for.

“LDCs have expected from EU much steeper targets like 45% by 2020 and 65% by 2030 from 1990 level,” he said. “EU and other industrialised countries should now make more efforts to raise their ambitions to help reach a new legally binding, robust, fair and equitable climate pact in Paris in 2015.”

The proposals were described as “disappointing” by Olai Uludong, the lead negotiator from the Alliance of Small Island States, once a key ally of the EU at UN climate talks. She told RTCC: “If this is accepted as a starting point for tackling the climate crisis then we certainly have a lot of work to do to ensure the world reaches an agreement by 2015 that is commensurate with the scale of the challenge we face.”

What’s clear from all sides of the debate is that this is just the start of a process that will last over a year and have to endure EU Parliament elections and a change of EU Commissioners. In a sign of battles to come, Polish MEP Konrad Szymański said the 40% target was “at best premature,” adding that a 27% target for renewables “does not take into account the electricity price impact of this policy.”

An early test of European resolve will come in March, when European leaders meet for a ‘Council’ and the UN convenes in Bonn to start drafting the text for Paris. Hæge Fjellheim, a senior analyst at Thomson Reuters Point Carbon, predicts “an exchange of views” rather than anything concrete at the EU’s March summit, stressing how hard it could be to get all 28 member states to agree on 40%.

EU President Barroso gave the 40% target a hard sell at Wednesday’s press conference, at one point appearing to suggest that this was the bloc’s official offer for the UN’s 2015 climate deal. Today’s communication appears to back him up. “The Commission sees no merit in proposing a higher “conditional target” ahead of the international negotiations,” it says.

But seasoned observers of the UN talks say a rigid 40% goal won’t wash, because it is well below the 55% trajectory needed to prevent warming of above 2C. It’s also well below what the EU’s own Impact Assessment says it’s capable of, a fact that will not go unnoticed in Washington or Beijing. UK energy and climate chief Ed Davey told reporters on Wednesday Europe “must be ready to adopt a 50% target” for an ambitious global climate deal to come off in 2015.

That’s a view shared by Greenpeace UK’s Political Director Ruth Davis, who says EU negotiators will need a mandate in Paris compatible with 2C. “If we all take Manuel Barroso’s word for it that he has personally inscribed the European Union’s 2030 target into a new deal in Paris I think he has delusions of grandeur. In the end this comes down to Cameron, Hollande and Merkel and where they want to position themselves.”

Nick Mabey from Environmental Consultants E3G says France, Germany and the UK are likely to push for more flexibility from the EU when it comes to UN talks in 2015, but warns the bloc will now need to start “rebuilding its influence” after offering renewable energy goals that are now lower than the USA or China. A weak or irrelevant EU is bad news for countries who want to see a tight ‘legally binding’ agreement in Paris, something leaders in Beijing and Washington appear keen to avoid.

The stakes are high, not just for the long term prospects of climate change, but also for global business investments in the coming decade. With energy demand soaring critical decisions need to be made this decade. After the announcement heavy emitting industries represented by Business Europe grumbled of “investment leakage” from the EU, while leading power plant investors like Siemens and Alstom said the 27% renewables target was too low to offer policy certainty.

Leading climate economist Lord Stern says the clarity over the pace of decarbonisation remains unclear, suggesting  “billions of euros of private investment” are at stake. “A strong emissions reduction target would also mean that the European Union can exert leadership in the international negotiations over a new climate treaty to be signed in Paris in 2015,” he said in a statement.

What’s clear is that the EU has made the first move in a Great Game that leads to Paris in December 2015. Some of its cards are now on the table; few believe it has many Aces up its sleeve.

“I think the thing to stress more than anything else is that this is not a decision that can be taken in isolation by the European Commission,” says Davis. “This is part of an ongoing negotiation towards a global goal which the EU claims it is absolutely committed.

“The question has got to be what are you going to do in that negotiation? It’s not just a question of what have you decided to do on the back of what is essentially infighting and squabbling from a set of Commissioners who are more interested in what’s going to be written on their political epitaphs than how European climate policy pans out.”