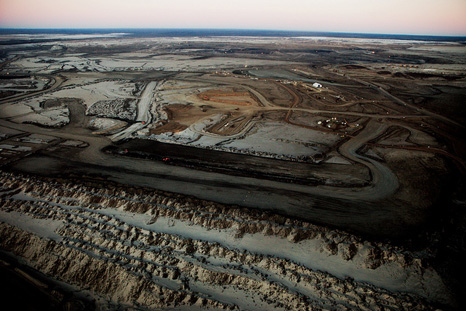 Oil from Canada’s carbon-intensive tar sands – one of the world’s single biggest sources of greenhouse gas pollution – could be used in the petrol tanks of European motorists from 2020 after the European Commission proposed to scrap curbs on imports of highly emissions-intensive fuels.

The EC’s executive arm said in its 2030 climate and energy framework yesterday that it wouldn’t set new thresholds on the carbon intensity of fuels used in transport from the start of the next decade.

Environmental groups said the EC’s proposal to drop a law curbing the carbon intensity of transport fuels would enable oil and products from tar sands to be brought to Europe, particularly if new pipelines are approved.

“[The EC proposal] is good news for oil companies and Alberta, with its high-carbon tar sands, but bad news for Europe in our move towards a more sustainable transport system,” said Nusa Urbancic, a campaigner with Transport and Environment in a statement.

The EU’s existing Fuel Quality Directive  aims to reduce the carbon intensity of Europe’s transport fuel by 6% by 2020.

“But the measures governing how the law will actually be implemented have yet to be released by the Commission, allegedly because of extreme pressure from oil companies and the Canadian government,” Urbancic said.

The measure to scrap the fuel law may be discussed at a meeting of EU governments in March on the climate and energy package, although a final decision on the 2030 proposals might not come until early next year.

On Wednesday, EU climate chief Connie Hedegaard told journalists: “There are still discussions on how to proceed on the fuels.”

A recent report from the US green group the National Resources Defense Council said the export of crude oil and refined products derived from tar sands could raise the carbon intensity of Europe’s fuel stocks by up to 32.5 million metric tons annually from 2020.

Canada’s tar sands, branded as ‘carbon bomb’ by environmentalists, could supply up to 7% of the EU’s fuel stock from the beginning of the next decade, the NRDC said.

US President Barrack Obama hasn’t yet decided whether to approve the northern branch of the hugely controversial Keystone XL pipeline, which would enable tar sands crude to be refined and from the Gulf Coast to export markets in Europe.

Riddle of the sands

Emissions from the process could triple to 107 million tonnes of CO2 equivalent a year by 2030 compared with 2011, according to the Canadian government’s own figures, driving up the country’s overall emissions at a time that developed countries will be expected to cut their carbon footprint in any future UN climate pact.

But green groups say that Canada has so far under-reported the carbon footprint of its oil sands industry, which has transformed Alberta’s economic fortunes and is a powerbase of Conservative Prime Minister Steven Harper.

The EC’s 2030 proposals yesterday also recommended that the EU drop the 10% target for renewables in transport that currently applies until 2020, a decision broadly welcomed by green groups.

They say the 10% requirement has mostly met with biofuels, which are blamed for competing with food crops and being even more emissions intensive than conventional fuels.