UK budget cuts could lead to flooding damage worth £3bn 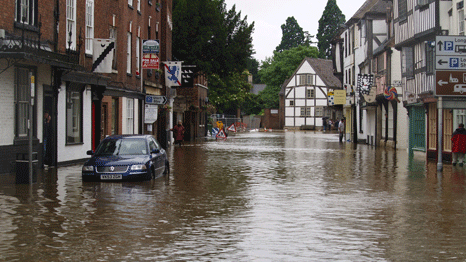 Floods in Tewkesbury in 2007 (Source: Flickr/cheltenhamborough)

Cuts to government spending on UK flood defences will cost £3billion in damage that could have been avoided, putting houses and businesses at risk across the country.

The government’s independent Committee on Climate Change says that, even based on modest assumptions, limited spending over recent years will lead to future flood damage that will cost the same amount to repair as the disastrous flooding that hit the UK in the summer of 2007.

The advisory body derided recent claims by the government that total spending has increased over the most recent spending period.

“Not enough is being spent, and we can expect the number of households at flood risk and damages from flood events to be on the increase,” the committee wrote in a blog post.

Total central government expenditure dropped by £30 million over the current four-year spending period, compared with the £2371 million spend between 2007-2011.

A question mark has hung over the Coalition’s spending on flood defences since storms brought chaos across the country, prompting the Thames Flood Barrier to be raised eleven times in eleven days.

Heavy rainfall brought misery to thousands across the UK, as rivers burst their banks and water breached defences.

Campaigners have accused the government of cutting spending on vital services and failing to take into account the future impacts of climate change, while environment secretary Owen Paterson has rigorously assured them that spending has actually increased.

The latest figures from the Committee on Climate Change point out that the government’s projections of a 4.4% growth in spending is undermined because these figures assume external contributions to the pot of money that has yet to be secured, as well as failing to take inflation into account.

As a result, money flowing directly from central government will be less than it was in the previous four-year funding period, despite an extra £120million pledged by Chancellor George Osborne in the 2012 Autumn Statement.

In addition, the £129 million provided to local authorities ostensibly to bolster flood defences is not ringfenced, which means that councils are free to spend it as they wish.

Figures suggest that more than half of this money has not been spent on local flood risk management, yet the full amount is still counted in the government’s official flood expenditure.

In total, the Committee on Climate Change predicts that an extra three quarters of a billion pounds is needed to stave off the risk of increased flooding – the greatest risk to the UK as the world warms with climate change, causing greater storms surges as sea levels rise. Every £1 spend today on flood defences on average prevents £8 in future flood damages.

“The Government has left a gaping half-billion pound hole in the country’s flood defences by cutting investment when climate change will make flooding worse,” says Guy Shrubsole, a climate change campaigner at Friends of the Earth.

“Today’s figures from the CCC are clear that more needs to be spent on flood defence and that makes Owen Paterson about as suited to defending Britain from rising seas as King Canute.

“David Cameron must intervene to show he’s serious about protecting households and businesses from worsening flood risk – by investing enough to keep pace with climate change and commissioning an independent review of the country’s preparedness.”