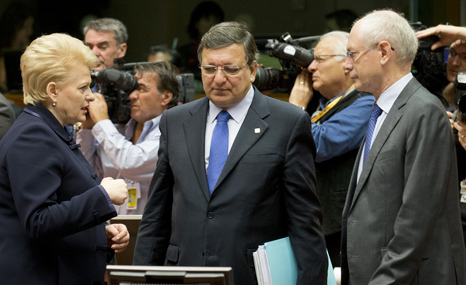 The European Commission could still recommend a 2030 greenhouse gas emissions reduction target as low as 35%, according to reports from Brussels.

The EU’s 2030 climate and energy package will be released tomorrow, a White Paper that will form the basis of talks between member states ahead of a possible agreement sometime in 2015.

The proposals will try and show how the EU will deliver on efforts to cut emissions of climate changing gases, curb rising energy prices and move away from imports of coal and gas.

The Commission had been expected to agree a 40% emissions cuts target on 1990 levels, but a draft of the White Paper text seen by RTCC suggests this is far from decided.

It says: “In the light of the evidence and the experience of current policies, the Commission proposes a new reduction target for domestic GHG emissions of (35% or 40%) compared to 1990, to be shared between the ETS and non-ETS sectors, as the centrepiece of the EU climate and energy policy.”

The text adds that the figures are the likely benchmark for any pledge to be made in 2015 at UN negotiations to develop a global emissions reduction deal, but critics say the two numbers are depressingly unambitious and will fail to provide badly-needed clarity for utilities and manufacturers on future investment.

Two weeks ago the energy ministers of the UK, Germany, France, Italy, Spain and the Netherlands wrote to EU Climate Commissioner Connie Hedegaard calling for a 40% target, arguing it is central to “unlocking billions of low carbon investment.”

A measure of how weak a 35% target is can be assessed in the EU’s own 2030 climate impact assessment report. It suggests the region would likely see a 32% reduction in its GHG emissions by 2030 based on its current policies, which it adds are “not sufficient to reach the EU’s long term climate objective.”

The text calls for a “coherent headline target” for renewables, suggesting goals of 25% or 27%, adding that member states could set their own national objectives. The UK has led the opposition against a target for wind and solar, but it is not clear whether EU proposals would be binding.

The EC recommends that renewable energy targets “would be fulfilled through clear commitments by the Member States themselves.”

It adds: “(These) should be guided by the need to deliver collectively the EU level target and build upon what each Member State should deliver in relation to their current targets for 2020.

Speaking from Brussels, Nick Mabey from Environmental consultants E3G said the current inclusion of 35% in draft texts was “deeply flawed” and indicative of weak leadership at the top of the Commission, the EU’s most powerful body.

“It undermines the EU’s credibility as a strong actor in keeping climate change below 2C,” he said, adding that a weak target would stain President Barroso’s reign as EC chief.

Speaking on condition of anonymity, one EU source in Brussels told RTCC talks are continuing today, with many expecting Barroso to exert his authority over the 4-5 Commissioners that are known to be pushing for 35%.

“This was identified as an issue they will keep to last moment and fix in the morning,” they said said. “Now the President will have to come up with a decision.”