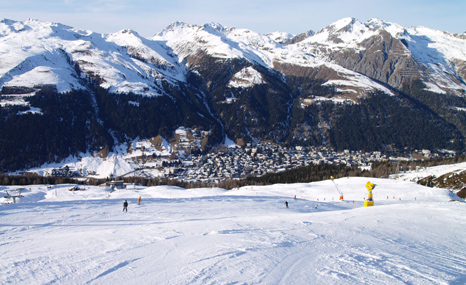 The world’s most powerful gather again this week for the World Economic Forum’s annual shindig in the Swiss ski resort Davos, and climate change has been placed higher up the agenda this year as the UN makes a renewed push for a global deal to slow carbon emissions.

Around 40 world leaders will be joined by heads of global institutions and 1,500 business leaders to debate and discuss the major risks facing the world in 2014.

Freak weather events and the failure of countries to cut emissions and prepare for the worst impacts of climate change are among the top ten risks the world faces this year, according to a report released ahead of the Davos meeting.

But former attendees said this week’s discussions are unlikely to unpick deadlocked UN climate talks. “Most of the discussions this week are on fairly technical issues, and meetings of this sort really need to try and resolve how the political obstacles to a climate deal are going to be addressed,” said Yvo de Boer, former UN climate chief who now works as an advisor to KPMG.

On my way to @davos. One third of #wef14 this year dedicated to #climatechange. Huge opportunity for #climateaction

He added: “If we had the US, China and the EU in the same room talking about the key issues on climate that would be more beneficial, although Davos does manage to raise awareness among political leaders and chief executives about the need to cut emissions.”

Major emitting countries have so far been reluctant to propose specific targets on how much they will cut greenhouse gas emissions after 2020, but are required to do so by early next year. Glacial progress at climate talks so far has prompted UN Secretary General Ban Ki-moon to hold high level climate talks in September to try and find consensus ahead of a ‘make-or-break’ summit in Paris at the end of 2015.

Ban and current UN climate chief Christiana Figueres will address delegates at Davos on Friday, designated as ‘climate day’ by the event’s organisers.

Around 23 events on the Davos programme are directly related to climate change and energy policy, and these issues will also be discussed in private meetings between tomorrow and Saturday.

The World Economic Forum’s founder Klaus Schwab and the UN’s Ban will urge politicians and business leaders to co-operate more closely in cutting emissions. Companies in sectors such as finance, retail, IT, and consumer goods now regularly report emissions and have carbon reduction targets in place.

But other corporations, particularly in the resources sector, say higher carbon prices and tougher targets imposed by government would be a major threat to remaining competitive with those economies that have little or no controls on emissions.

Senior policymakers in the EU are fighting among themselves on how much the bloc should consider cutting emissions by 2030, and lobbying by some energy-intensive industries may be behind a push for weak targets to be included in white paper tomorrow, green groups claim.

But even companies with the highest carbon footprints are waking up to the risk that fossil fuels assets may be written off as ‘stranded assets’ in later decades. Curbs on greenhouse gases could mean that more reserves of fuels such as coal are left in the ground, rendering them worthless, according to analysis.

“Action by companies could mean that governments are prepared to do more on climate change, but there’s a strong feeling that the UN talks process needs to do more to engage with the private sector,” said Paul Simpson, heads the UK-based Carbon Disclosure Project and will be attending Davos this week.

Supertyphoon Haiyan, major floods and storms in Europe, a US drought and a blast of Polar weather across much of North America are just some of the events that in the past year have refocused attention on what climate change could look like in the coming decades.