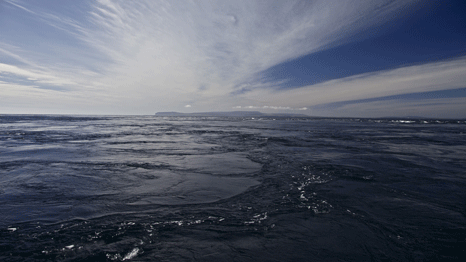 The Pentland Firth could generate enough tidal energy to power half of Scotland, say engineers.

A new assessment estimates that the water rushing between Orkney and mainland Scotland could produce 1.9 gigawatts of power.

This would take the Scottish Government almost halfway towards achieving their goal of 100% clean energy by 2020.

The Pentland Firth has some of the highest tides in the UK. The flow of water is particularly rapid as the tide shifting from the Atlantic into the North Sea is forced through a narrow eight-mile channel.

The researchers who worked on the study believe that as much as 4.2Gw could be captured by placing turbines across the width of the channel. Of this, they predict 1.9Gw could be used, as the technology is not 100% efficient.

The study builds on earlier attempts to calculate the potential power that could be harnessed by the Firth. Previous estimates range from 1 to 18Gw. Alistair Borthwick from the University of Edinburgh says that their calculations give the most accurate impression to date of the true scale of the tidal power to date.

He says: “Our research builds on earlier studies by analysing the interactions between turbines and the tides more closely.

“This is a more accurate approach than was used in the early days of tidal stream power assessment, and should be useful in calculating how much power might realistically be recoverable from the Pentland Firth.”

The study outlines areas where turbines should be located in order to maximise the area’s potential.

The Crown Estate, which owns the land, announced in 2010 that it had awarded development rights to a number of companies for eleven energy projects in the area, with a total capacity of 1,600 Mw. It is the first to be made available for commercial scale wave and tidal development in the whole of the UK.

In September, the Scottish government gave the go-ahead to power company MayGen to build six demonstration turbines on the site, generating 9Mw of power. During the first phase of the plan, they hope 86 turbines will be installed – enough to power 42,000 homes.

Professor Guy Houlsby of the University of Oxford, who took part in the assessment, said: “The UK enjoys potentially some of the best tidal resources worldwide, and if we exploit them wisely they could make an important contribution to our energy supply.

“These studies should move us closer towards the successful exploitation of the tides.”

In 2012, renewable energy provided 40.3% of Scotland’s electricity. The development of the Pentland Firth could therefore be the push the Scottish government needs to allow them to hit their 100% renewables goal by 2020.