EU climate leadership in doubt as talks on 2030 targets stall 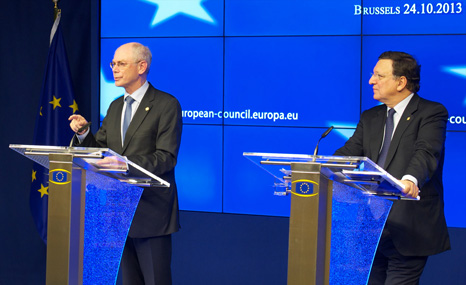 Negotiations over the EU’s proposed climate targets for 2030 are still stuck over the level of greenhouse gas emission reductions the Union is prepared to accept.

Representatives of the 28 European Commissioners are expected to meet today, Friday and next Monday in an attempt to agree on a figure, which currently ranges between 35% and 45%.

EU sources say there is increasing unease at the silence from Commission President Jose Manuel Barroso, who so far has not revealed what goal he would like proposed in a white paper due out on January 22.

Hedegaard strongly supports the 40% figure, but Energy Commissioner Günther Oettinger and countries such as Poland are pushing for this to be lower.

Green groups warn that the target should be closer to 55% if the EU is to reduce its global share of emissions and help prevent dangerous levels of global warming beyond the 2C limit countries have agreed to avoid.

“With the number of devastating climate change impacts increasing, at least 55% emissions cuts by 2030 is the only way the EU can remain on the pathway to 95% emissions reductions by 2050,” Julia Michalak from Climate Action Network Europe told RTCC.

“This goal must be achieved to stay below the dangerous level of 2 degrees of warming. Setting a lower target would mean that the EU hasn’t learned its lesson from setting a low ambition 2020 target, which caused the collapse of the EU ETS and undermined EU’s role in international negotiations.”

Talks are also continuing over energy efficiency goals and a renewable energy target, which some countries such as the UK, are opposed to.

RTCC understands it is increasingly likely the EU could agree to an overall target for clean energy which would not be binding at national levels.

Spain, Denmark and Germany already produce considerable levels of electricity from wind and solar, while other leading states such as the UK and France lag behind, relying on a mix of nuclear and gas.

Yesterday it was revealed a coalition of the UK and Poland had successfully blocked efforts to ensure shale gas drilling, also known as fracking, was subject to tougher regulations.

Instead, a set of non-binding “recommendations” covering protection against water contamination and potential earthquakes will be published on 22 January together with the 2030 targets white paper.

One climate diplomacy expert says the splits among member states and an apparent lack of leadership from Barroso does not bode well for talks on a global climate deal set to be signed at the UN in 2015.

Nick Mabey from environmental think tank E3G says a proposed 40% greenhouse gas reduction target is unlikely to be “taken seriously” by the rest of the world.

“There is no point the EU talking the talk on 2C if it is not prepared to walk the walk,” he says in a blog on the E3G website.  “The European Commission is failing to provide the science-based proposals needed to protect the interests of European citizens.

“It is time for the Member States to take over the debate and support the UK proposal for a 50% GHG reduction target by 2030 as the pathway towards an effective global agreement to control climate risk in 2015.”