While climate change negotiators at the Maritim Hotel in Bonn have been locked in a stalemate over the past week, the Rhine has raced by, inches from breaking its banks.

Swollen rivers are causing havoc from Austria to Hungary with Germany and the Czech Republic hit particularly hard. Hungarian Prime Minister Viktor Orban said the country was facing “the worst floods of all time”.

In a warming world extreme weather events such as flooding are set to become more common, making these floods an important test of Europe’s capability to cope.

Longer term, the EU climate change adaptation strategy report, published in April, warns the minimum cost of not adapting to climate change is estimated at €100 billion a year in 2020 and €250 billion in 2050 for the whole EU.

Between 1980-2011 it says floods killed more than 2,500 people, affected more than 5.5 million and caused direct economic losses of more than €90 billion.

“The EU is perhaps prepared,” says Åse Johannessen, research fellow at the Stockholm Environment Institute who focuses on flood resilience. “The tendency is to push important decisions that have very long term implications. We tend to wait until these kinds of disasters occur before listening to the voices calling for change.” 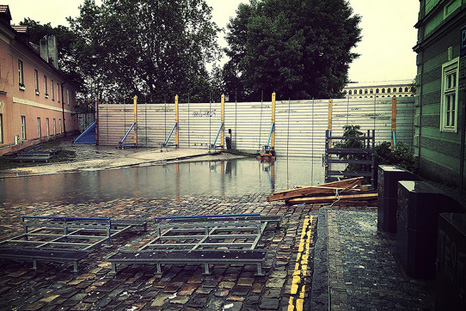 Prague’s ring of steel just about keeps the 2013 floods at bay. The city was devastated by flooding in 2002 (Source: Flickr/Khedara)

For the tens of thousands of people evacuated in central Europe last week, that is unlikely to be good enough.

Johannessen suggests that increasing the opportunity for vegetation to slow down water’s journey from the ground to the river and by returning rivers to their more natural state could reduce the impacts.

“The water needs to flow more freely, if you control it too much it will eventually break out,” she says.

Johannessen’s approach of prioritising prevention, would expose cities to far smaller flood events but more often, a process she refers to as safe fail.

Flood defences failed New Orleans during hurricane Katrina when a huge storm surge hit the city. Over the years the levee network drained the wetlands that sat between it and the ocean.

This would have acted as a brake on the encroaching seas. With the speed bumps removed high waters were able to race toward the city and break through the crash barrier that now stood in its path. Last ditch flood defences made the situation worse.

While a component of increased flooding can be traced back to climate change, poor river basin management and urbanisation have played their part too.

“One of the reasons is the increase in heavy precipitation that we have seen in the last 50 years. This is because the warming means there is more water vapour in the atmosphere,” says Johannessen.

“In terms of Central Europe the change in land use has been significant. If you look at the river Elbe basin in the year 1100, the floodplain was about 620,000 hectares and now it’s about 84,000 hectares.”

Rivers are being given less space to move around on and squeezed through shipping friendly channels that only serve to speed a surge in rainfall downstream.

As ever, making changes means finding the political backing and the investment.

“At the moment the voices that are heard tend to be advocating for big embankments and flood defences when they should be addressing the underlying causes such as land use change. It’s a harder thing to do. There are lots of interests involved so it is hard to find a political solution.”

Even once the investment is found to respond to flooding, it has to be channelled in the right direction.

“One of the hardest parts in any kind of disaster risk reduction is attracting investment. But the investment in the cities is more about curing the symptoms, than addressing the problem.”