The UK is well versed in showmanship when it comes to climate change targets. But does it mean what it says? 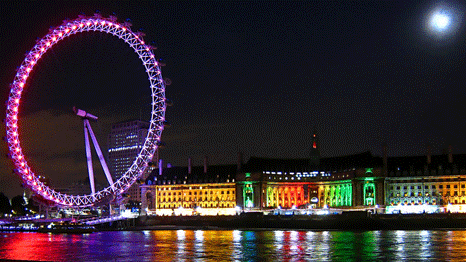 When it comes to climate change targets, the UK likes to walk with a swagger.

Whether it is promising to be the “greenest government ever”, boasting how tough the 2008 Climate Change Act is, or pushing the EU for more climate ambition than all other member states, the island nation specialise in grand promises and lofty statements.

But where does the hubris end and real action begin?

There is no denying that the UK has, at times, shown a real commitment to its self-appointed role as a climate leader within the EU.

But at the same time, key ministers within the government seem to regard the UK’s climate pledges with about the same level as commitment as a hastily made promise on a drunken night out.

ANALYSIS: Why did David Cameron promise to go green?

Owen Paterson has earned himself a reputation as something of a climate sceptic since taking up the post of Secretary of State for the environment, while Chancellor George Osborne has showed few qualms in pledging his allegiance to energy companies.

On the mainland, this schizophrenic approach has not gone unnoticed – and it couldn’t have come at a worse time. “Looking for the outside we do see quite a lot of incoherence in the messages we get from the UK,” one senior European diplomat told RTCC, speaking on condition on anonymity.

“We see decisions from the Climate Change Committee pushing clearly forward, we see the minister [Ed Davey, Secretary of State for Energy and Climate Change] being very firm in his determination. But we also see others in the ruling Conservative party sending very different messages about where they may be going, and I have to admit that does send a slightly mixed signal.”

Now is no time to be vacillating. With the EU poised to present its White Paper on its package of climate targets for 2030 in January, the next month is crucial in tying up the final details.

This paper will be negotiated and firmed up in increments over the course of the year into what will eventually form the basis of both a decade of EU domestic targets and its pledges on the international stage. For the UK, the time is up for indecision.

The UK sent a strong signal last week that it still takes its position as a climate leader seriously, with the Climate Change Committee, headed by Lord Deben, saying that the carbon budget should not be changed when the government undertakes its review of its targets in the New Year.

This means that the Treasury is on legally shaky ground if it tries to weaken the budget – the 2008 Climate Change Act stipulates that the government is obliged to take into account the advice proffered by the Committee – but that doesn’t necessarily mean that it won’t try.

Osborne has shown himself to be no friend of the carbon budget, and in December last year said that the UK would be able to better exploit its gas resources if the budget “is revised upwards and emissions reductions are more gradual.”

When approached by RTCC, the Treasury refused to comment either way on whether it intended to weaken the budget when it undertakes its review. The one point it did confirm was that it would be important to make a decision “as quickly as possible” and that it would consider the Committee’s advice “carefully”.

In an interview the Committee chief Lord Deben, who spearheaded the review,told RTCC that following his findings, there was no legal basis upon which the government could change the carbon budget. “If they were to change it, they would have to find a reason to do so, and there seems to be no position in which that could happen.”

He added: “What is true is that if Britain had signalled it was going to lessen its internal demands, it would make its external position very much weaker for obvious reasons.”

The UK is currently pushing for the strongest emissions reduction target out of all the 28 member states for the EU’s 2030 climate package.

By now well practised in one-upmanship in the climate policy circus, the UK is pushing for a 50% cut in emissions in the case of an international deal, boosting the 40% pledged by most other countries. Some, such as Poland, have yet to come forward with a target at all.

This leaves little margin for error when it comes to setting its domestic targets if the UK is to be taken seriously within the EU. Antony Froggart, an expert on European energy policy at Chatham House, says that domestic policies like the carbon budget are important in sending signals to investors, but also in maintaining the UK’s credibility on the international stage.

“I think it’s very important that the UK maintains strict domestic targets if it’s to be believed that it wants a strong European and international target,” he told RTCC.

“There are suggestions from the Treasury that they don’t want such strict targets but given there is a UK position on 2030 targets in the EU it would seem they need to keep strong domestic targets.”

But in a classic display of its split personality, the UK is pushing hard against a separate target within the EU package for renewable energy. This target is embedded in the current package, but faces being wiped from the 2030 edition. It is the view of most member states, as well as Climate Commissioner Connie Hedegaard, that a renewables target is crucial for ensuring that the emissions target is actually achieved.

The UK’s stance is that it should be up to individual member states to decide how they reach the overall emissions reduction target.

“I don’t care how we get there – what I care about is meeting the target and I don’t think we should believe that a particular mix is the best mix to meet that target,” Lord Deben said, confirming that the markets would be the deciding factor in determining the mix.

“You can do it any way you like. You can do it standing on your head waving your feet in the air if you want to. If that works then that’s what you should do.”

Others do not share his confidence in the overriding power of the market – nor in the good faith of the UK in promoting such a view. Bas Eickhout, an MEP representing the European Green Party, told RTCC: “There is a misguided trust that the markets will deliver, although there is enough proof that they’re not doing that.”

He added that trying to dissuade the EU from adopting a renewables target fitted in conveniently with the UK’s new commitment to establishing a nuclear power industry. “As soon as you start pushing renewables more, that will conflict with what the UK is doing with its nuclear plans,” he said.

“Therefore they are going against a renewables target because they want to keep their own nuclear plans alive.”

In the end, the EU cannot be greater than the sum of its parts. While no one country alone can either save or condemn the 2030 package, the signals the UK send will be crucial in framing the discussion.

With the outcome set to form the basis of the EU’s commitments with the United Nations’ global agreement in 2015, now is not the time for countries to cast away their cloaks of climate ambition.

If the UK wants the powerful international treaty it says it does, it should stick with the role of superhero.