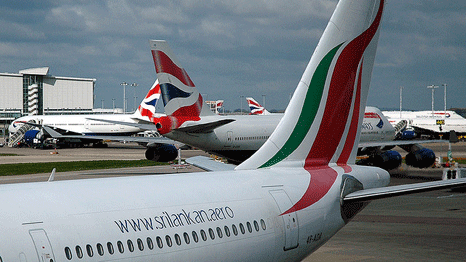 A third runway at London’s Heathrow airport would wreck the UK’s climate targets, WWF has warned.

Any airport expansion – at Heathrow or elsewhere – would put the UK on track to break its legally binding target of an 80% reduction in greenhouse gas emissions, says the environmental campaigning group.

The warning comes ahead of a report set to be published on Tuesday by economist Howard Davies. This is expected to suggest any new expansion to London’s airport capacity is located at Heathrow.

“We simply can’t ‘magic’ these emissions away by expecting a cap & trade scheme (such as the troubled European Emissions Trading System) to offset this growth,” said WWF-UK’s David Nussbaum.

“Nor is any global aviation deal in sight to offset UK emissions growth from airport expansion.”

Nussbaum also questions the business case for the proposal, the main rationale of the supporters for the extra runway.

According to WWF analysis, business flying has fallen by 23% since 2000 – part of a long term trend based on the fact that more businesses are using technology such as video conferencing. Users are projected to increase by 183 million by 2016, according to figures from Cisco.

The aviation industry is committed to carbon neutral growth from 2020, which is expected to be achieved through improvements in the efficiency of the aviation sector, with the remainder dealt with through carbon offset credits.

The UN’s aviation body, ICAO, will consider establishing a global emissions trading scheme for the aviation in 2016, although observers to the industry suggest that an offsetting deal currently seems the most likely option.

The EU already trades aviation emissions within its own airspace, but the UK is currently trying to kill suggestions that this should also include international flights.

Politically, this is a divisive subject in the UK, with the Coalition Government rejecting previous plans to construct a third runway when they came into power in 2010.

London Mayor Boris Johnson has already condemned any plans for a third runway from an environmental perspective, and has refused to commit his loyalty to David Cameron should the Prime Minister back Heathrow expansion.

In a letter dated from July this year, Lord Deben, the head of the Climate Change Committee, told Davies that, since aviation emissions are included in the UK’s target under the Climate Change Act, any growth in the sector would have to come at the cost of deeper cuts elsewhere.

“[T]he higher the level of aviation emissions, the deeper the emissions cuts required in other sectors to meet the economy-wide target,” wrote Lord Deben.

“Given the need to limit aviation demand growth in a carbon constrained world, we recommend that this should be reflected in your economic analysis of alternative investments.”

In other words, as it is difficult to reduce emissions from aeroplanes, other sectors would have to cut emissions by 85% on 1990 levels, rather than the 80% dictated by the Climate Change Act, in order to make room for the aviation sector.

Based on the current possibilities for decarbonising other sectors and technological improvement to flying, this means aviation must grow no more than 60% on 2005 levels.