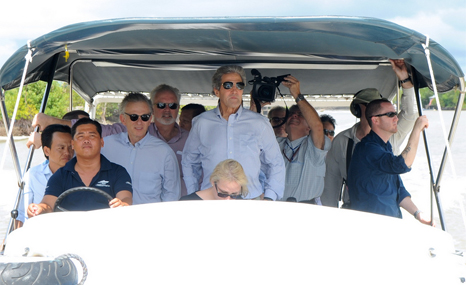 Secretary of State John Kerry says the USA has committed an initial $17 million to helping vulnerable communities in Vietnam adapt to climate change.

The funding will be channelled through USAID’s Vietnam Forest and Deltas Program, part of a wider US effort in the region to invest in low carbon infrastructure.

Kerry made the announcement this week on a visit to the Mekong Delta, a vast and fertile area in the south of the country where more than half of its rice grows.

“Vietnam is one of the most vulnerable countries in the world when it comes to climate change. And we will see very serious impacts if we don’t change course today. That’s why all of us need to work together and focus in on these issues,” he said.

Dominated by flood plains, the Delta is at acute risk from rising sea levels, which could displace millions and destroy farmlands with salt water.

Kerry, who was last in the region in 1969 as a US soldier during the Vietnam war, warned that failure to address the underlying causes of climate change could result in catastrophe.

“Hundreds of millions of people throughout Asia and the world depend on that rice as a staple of their nutrition. Here in the breadbasket, the rice breadbasket of Vietnam, higher sea levels mean more salt water spilling into the Mekong Delta.

“And anybody who has ever farmed or grown a garden can tell you that salt water and salt are no friend to rice paddies.”

The country’s National Climate Change Strategy states that between 2001 and 2010, damage caused by weather-related disasters has led to 9,500 dead and missing people and a loss of around 1.5% of GDP per year.

Vietnam is one of the fastest growing economies in South East Asia, and also has some of the world’s most ambitious climate change laws.

Hydroelectricity already provides 35% of Vietnam’s energy, and the government has plans to increase the renewables contribution to the energy mix from 3% in 2010, 5% by 2020, further increasing to 11% by 2050.