The latest Globe Climate Legislation Study was published in January 2013, focusing on 33 countries from Africa, Asia, Europe and the Americas. Visit the Globe International website to download a full report and access data from the other countries featured.

Vietnam is one of the fastest growing economies in southeast Asia. However, as a relatively minor emitter of greenhouse gases, it has made no 2020 pledge under the Copenhagen Accord or the Cancun Agreements.

Vietnam has the highest population density in southeast Asia (excluding Singapore) and, as it lies in the tropical cyclone belt, it is vulnerable to weather-related hazards, suffering from floods, droughts, saltwater intrusion and landslides.

It was recognised by the UN as one of 5 countries likely to be most affected by climate change.

Vietnam’s National Climate Change Strategy states that between 2001 and 2010, damage caused by weather-related disasters has led to 9,500 dead and missing people and a loss of around 1.5% of GDP per year.

Consistent with the predicted impacts elsewhere, climate change is likely to hit hardest those areas with already high levels of poverty.  Given this vulnerability, and the relatively low level of emissions of greenhouse gases, Vietnam’s approach to climate change has been dominated by adaptation to the impacts.

Recognising the importance of Vietnam’s forests, the country has been chosen as one of 13 to participate in the UN Reducing Emissions from Deforestation and Degradation Programme (UN REDD) and is focusing on ‘win-win’ actions such as tackling erosion and landslides.

Mitigation will become increasingly important.  To power the predicted economic growth over the next few years, electricity demand is predicted to treble by 2020.  Nuclear is expected to play a role and the government has set a target of producing 8000 MW from nuclear energy by 2025.

At the same time, renewable energy has been identified as the source of electricity with the highest potential for development and modest targets have been set to increase the share of renewable energy (excluding hydro) in electricity production from 3% in 2010 to 5% in 2020 and 11% by 2050. 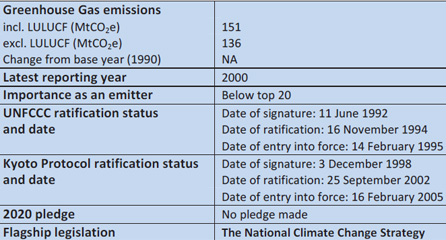 Political background
Vietnam is a highly centralised state, whose constitution provides the fundamental and highest law. The majority of power resides at this central level with all laws and policies issued by the National Assembly and the Government. The former produces framework legislation, while the latter provides guidance on the implementation of legislation.

Climate vulnerability
The country lies in the tropical cyclone belt, it is already vulnerable to hazards, suffering from floods, droughts, saltwater intrusion and landslides. Vietnam’s National Climate Change Strategy states that between 2001 and 2010, damage caused by such disasters has led to 9,500 dead and missing people and the loss of about 1.5% of GDP each year.

The country was recognised at the 13th Conference of Parties to the United National Framework Convention on Climate Change in Bali as being one of the five countries likely to be most affected by climate change.

National action
The National Strategy for Climate Change states that “to become a modern industrialised country by 2020, Vietnam will need to accelerate its production and consumption activities, especially in industry, transportation, and urban development, which may result in higher emissions of greenhouse gases”.

Renewables
Nuclear power is now expected to play a role in Vietnam’s energy supply. A nuclear power development plan approved by the government in August 2007 set a target of 8000 MW from nuclear energy provided to the grid by 2025.

Biofuels (ethanol and vegetable oil) only represent a small proportion of the mix, but the Government’s goal is to increase their contribution to 1% of petrol and oil by 2015, rising to 5% by 2025. In addition, energy efficiency is also being promoted, with US$2.25 million being allocated to energy efficiency projects in 2008 alone.

Forests
Vietnam is one of 13 countries chosen by the United Nations Reducing Emissions from Deforestation and Degradation Programme (UN REDD), and has submitted a Readiness Preparation Proposal to the World Bank’s Forest Carbon Partnership Facility.

The Law on Mining prohibits mining activities in the areas of protected forests. This presents an opportunity at least for the implementation of REDD+, but mineral extraction is often given priority over forest conservation.

On the restoration side the Government has issued a number of policies on developing watershed protection forests, such as the 5 Million Hectares Reforestation Programme (5MHRP), which was mandated largely to address the problems of deforestation caused by hydropower development.

Major climate laws
The National Climate Change Strategy/2011 – The law sets a number of targets for the country to hit from now until 2050.

-After every 10 years, reduce GHG emission from agriculture by 20%, while securing 20% of the sector growth and lowering the rate of poverty by 20%
-Establish, manage, protect, sustainably develop and use 16.24 million hectares (ha) of forest, increase forest coverage to 45%; manage 8.134 million ha of production forest; 5.842 million ha of protection forest and 2.271 million hectares of special‐use forest
-Hydropower plants’ capacity to reach 20,000–22,000 MW
-Increase the share of new and renewable energies by 5% of the total commercial primary energies (increase to 11% by 2050)
-90% of industrial facilities using cleaner production and reducing consumption of energy, fuel and materials
-By 2015 establish a new price system for efficient use of energy
-90% of the urban household solid waste to be collected and treated, of which 85% to be recycled, reused and recovered for energy generation.
-Accelerate the transformation to use of compressed natural gas and liquefied gas in buses and taxis, with 20% of buses and taxis by 2020 (and by 80% by 2050)

Approval of the national REDD+ action programme/2012 – Reduce 20% of the total emission in the agricultural sector by 2020. Increase the national forest cover rate to 44–45% by 2020

Implementation of the Law on Forest Protection and Development/2010 – Organisation of forest management, protection, development and use.

National Energy Development Strategy of Vietnam 2020-2050/2007 – By 2050, nuclear electricity will account for about 15–20% of total commercial energy consumption of the whole country.

Issuance of Production Forest Development Policy 2007–2015 – To plant 2 million ha of production forest with an average of 250,000 ha per year (including the re ‐ afforestation area after harvesting).

Approving the Scheme on Development of Biofuels up to 2015 – By 2010 develop various models of trial production, specifically 100,000 tonnes of E5 and 50,000 tonnes of B5. By 2015 the output of ethanol and vegetable oils will reach 250,000 tonnes. The vision to 2025 is for Vietnam to have achieved advanced level technology in the sector and for ethanol and vegetable output to reach 1.8 million tonnes, c. 5% of Vietnam’s gasoline and oil demand (unspecified whether current demand or projected level of demand).