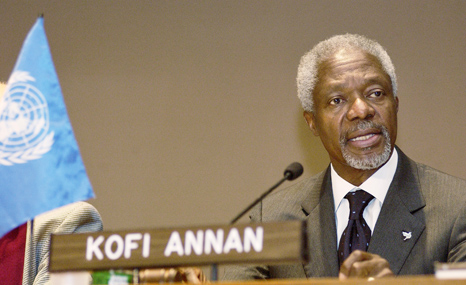 Writing in the New York Times, Annan says the failure of the recent UN climate summit in Warsaw means next year’s meeting in the Peruvian capital Lima has to deliver “substantive progress”.

Specifically, he calls on governments to start “phasing out fossil fuel subsidies”, which according to the International Energy Agency (IEA) are valued at $485 billion a year.

And he repeats calls by his successor Ban Ki-moon for the world’s wealthier nations to deliver on financial and greenhouse gas reduction promises.

“While cutting subsidies is an issue for developed and developing countries alike, it remains true that the Group of 20 countries accounted for 78 per cent of global carbon emissions from fuel combustion in 2010,” he says.

Alluding to to the walkout by green groups during the Warsaw meeting, Annan said there is a “growing level of frustration with what many perceive as a lack of political leadership at a time when it is needed most.”

“It was clear before this latest round of talks in the Polish capital that the world’s governments must make real progress toward an ambitious, universal and legally binding climate agreement to be adopted in 2015,” he adds.

Governments are set to gather in New York next September for a ‘Climate Leader’s Summit’ hosted by Ban, followed by the meeting in Lima at the end of the year.

In 2011 countries agreed to work towards a global emissions reduction deal to be signed in 2015, and implemented in 2020, aimed to ensuring the planet does not warm more than 2C above pre industrial levels.

The UN’s latest climate science report, published in September, warns levels of warming are consistent with temperature rises beyond 2C by the end of the century.