A Staten Island park will host a solar energy system which will generate enough energy to power 2,000 homes 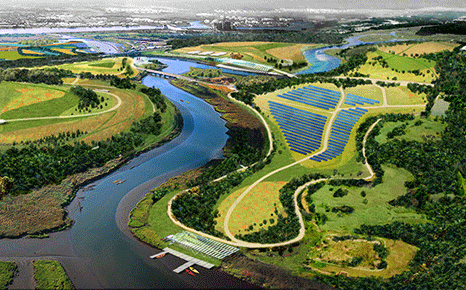 A rendering of the 47-acre solar installation at Freshkills Park on Staten Island. (Pic: Mayor Bloomberg)

When it was closed in 2001 it was 25 meters taller than the Statue of Liberty, and it was estimated that, if kept open, the landfill would have eventually become the highest point on the East Coast.

Having been transformed into a 2,200 acres park, almost three times the size of Central Park and the largest park developed in New York City in over 100 years, Freshkills will lease 47 acres of land to solar company SunEdison.

The company will design, construct, install and operate the facility with the potential to generate up to 10 megawatts of power – five times more than any solar energy system in the city and enough to power approximately 2,000 homes.

New York Mayor Mike Bloomberg said: “Over the last twelve years we’ve restored wetlands and vegetation and opened new parks and soccer fields at the edges of the site. It is only fitting that Freshkills, once a daily dumping ground, will become a showcase [of] urban renewal and sustainability.”

The use of municipal landfills to develop renewable energy facilities was outlined in PlaNYC, Mayor Bloomberg’s programme to prepare the City for more residents, strengthen the economy, combat climate change, and enhance the quality of life for all New Yorkers as well as help to meet the strategy’s goal of a 30% reduction in greenhouse gas emissions by 2030.

New York City already has one of the lowest per capita greenhouse gas emissions levels among major global cities, one-third the US average, due to its density and reliance on mass transit.

Now, in the aftermath of Hurricane Sandy which struck New York in 2012, Mayor Bloomberg’s $20 billion PlaNYC strategy is being held up as a case study in ambitious climate mitigation and adaptation policy.

By 2030, average temperatures could rise by as many as three degrees fahrenheit in NYC – more than other region of the country because its huge array of buildings absorb and retain heat.

The city’s sea levels, which hug 520 miles of coastline, have already risen a foot in the last 100 years and are projected to rise by up to 10 inches more in the next two decades.

Furthermore, Ban Ki Moon has selected the city to host a world leaders climate summit in 2014, one of the last major meetings ahead of the 2015 UN climate conference in Paris, where countries have agreed to sign a new emissions reduction deal.

The Department of Parks and Recreation intends to formally map an additional 1,500 acres of the Freshkills site as parkland which will include a provision for specific sites to develop renewable energy.

Sergej Mahnovski, director of the Mayor’s Office of Long-Term Planning and Sustainability said that not only does this project demonstrate that renewables can be integrated into the local grid, but also sends a signal to the market place that renewable energy is achievable within the city.

“This project will also push existing regulations to their boundaries. Interconnection with the utility system will have to be clarified, State programs aimed at increasing renewable energy will have to be expanded, and landfill post-closure care will have to be rewritten; and these are only a few of the challenges ahead. But this is a necessary undertaking in order to shift our power sector to a cleaner, more reliable energy future.”