Yeb Sano: ‘set aside narrow interests for good of humanity’

The energy may be flagging in Warsaw, but the sense of urgency is ratcheting up as UN negotiations on climate change push into final hours 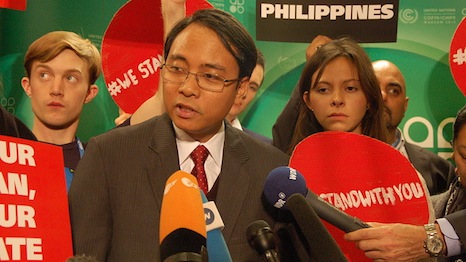 Yeb Sano has attracted the world’s attention by fasting at the conference (Source: 350.org)

“It has been a long day and a long night,” says Kishan Kumarsingh, who is leading the latest round of negotiations here in Warsaw. It is probably the one statement that everybody in the room can agree upon.

UN negotiations have now ticked over beyond their allotted time. The energy in the room is flagging, but the talks are not: as things stand, they look ready to tip over into Sunday.

Claudia Salerno, the feisty leader of the Venezuelan delegation who yesterday launched an attack on EU leader Connie Hedegaard, intervenes to say that they have now been negotiating for 30 hours straight: “We are humans, not machines,” she says.

Most seem to be doing their best to prove her wrong; the Nicaraguan delegate has been on an energizing diet of coffee and coca-cola, while another negotiator whispered to RTCC that she hasn’t slept in four days.

But the fact that the talks are ongoing in spite of the fatigue indicates just how much is at stake. With this conference now drawing to a close, the UN has just four more weeks of climate change-related squabbling left before a legally binding treaty is due to be signed off in 2015.

Filipino delegate Yeb Sano, who has been fasting for two weeks now, predicts that the earliest we can expect a resolution to the talks is Saturday evening. He heroically rejects a piece of chocolate offered to him by a colleague as he explains to RTCC why he thinks the talks show no sign of stopping.

“The mere fact that we have gone way way past the due time for the COP to end is an indication of how different the crunch issues are,” he says.

“Of course, negotiations are still on going now but based on the current status of the text we have seen we are disappointed by the disregard of the red lines of many developing countries.”

Warsaw, he says, is a crossroads for the entire process.

“We can go down a spiraling path towards a meaningless climate regime or take this golden opportunity to tell the whole world and send clear political signals that we can set aside narrow interests for the greater good of humanity.

“This is a real moment here.”

While the deadline for the end of this conference has officially passed, little has been settled. There have been some minor successes in the realms of forest preservation and gathering funds for adaptation, but countries are still squabbling in the vast plenary room over the key issues: long term finance, loss and damage, and the essential structure of the 2015 deal.

“It’s deeply disturbing,” says Jennifer Morgan, director of the Climate and Energy Program at the World Resources Institute. “You come in here at the beginning of a meeting with the risk of climate change abundantly clear from the Philippines and the IPCC [the UN’s climate science report] and you have countries unable to work together to come up with a simple step forward.”

One of the most contentious aspects of the last two weeks, loss and damage, remains unsettled, with the final text making its long awaited appearance halfway through COP President Marcin Korolec’s informal summary discussion of the proceedings this morning.

The gavel is unlikely to go down on this issue without a fight: the core debate over whether this should be set up as an independent mechanism or whether it should be included as part of adaption measures is unsettled.

“We can’t keep the growing loss and damage elephant under the adaptation carpet anymore,” says Harjeet Singh of Action Aid. “Making it the third pillar is the only way forward.”

Yeb Sano says that loss and damage, along with finance, are key to building trust among the parties: “If that is not forthcoming this whole ADP process [deciding the 2015 deal] will be greatly jeopordised.”

While some countries—including the US, Canada and Japan—have signalled that they are willing to go ahead with the finance text as it stands, their hesitant acceptance is not echoed around the room. Quamrul Chowdhury, speaking on behalf of Bangladesh, says that his country’s hopes have been “shattered” by the proposal as it stands.

The Nicaraguan delegation said this morning that they would still like to see several changes to the text before they accept it. The US and Canada said that if the discussion is reopened, they would also like to change certain elements of the text. Such negotiations could take the process through Sunday night.

Meanwhile, the various alliances within the negotiations are still wrangling over whether the new agreement should apply equally to developed and developing countries—a hold-up that one diplomat told RTCC was “scary”.

Wael Hmaidan, head of the Climate Action Network, told RTCC that if the negotiations don’t click into gear soon, the contents of final agreement could be as bad as having no agreement at all.

“Governments feel the urgency of the problem. They feel the need to achieve an agreement by 2015, but everyone has a different view of what that agreement is and what is the role of others.

“Everyone is trying to keep a responsibility on the other party and push for others to take more role as much as possible. I don’t think this objective will change a lot, but there’s also a chance that nothing comes out. What comes out can also be as bad as nothing coming out.”

But climate action won’t stop whenever this conference finally ends. While it is still too early to call what the final outcome will be, whatever happens will shape the direction of the fight to tackle climate change over the next two years.

Jennifer Morgan focuses on the role that heads of states can play over the next couple of years. With Ban Ki-moon’s summit scheduled for September, figures like Barack Obama and David Cameron will be absorbed into the process.

“I think there’s no doubt no matter what happens, this issue needs to be grasped by heads of states,” she says.

“They need to get involved and figure this out because the stakes are just too high and you need the highest level of leadership in government to find a way forward.”

Meanwhile, Hmaidan focuses on the need of raising ambition on a national level in the interim between now and next year’s conference.

“We need to work in capitals on a national level, pushing our governments to increase their ambition on climate change. The work is not here.

But even Monday, let alone the coming year, probably seems a long way off the the delegates sitting in the underground plenary room in Warsaw’s nation stadium right now.