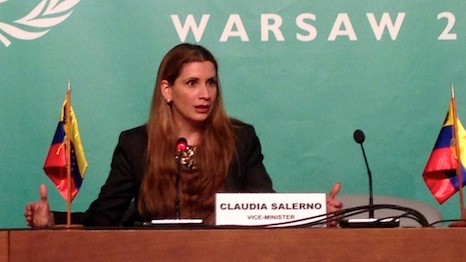 By Sophie Yeo and Ed King in Warsaw

Negotiations at UN talks in Warsaw aimed at developing a framework for a global climate change deal are in deadlock tonight, amid a fierce row between countries over how and when greenhouse gas emissions targets should be made.

Discussions are now expected to stretch into the night, with the question over how national pledges would be reviewed by other countries dividing developed and developing states.

The USA and European Union appear keen to push for countries to reveal their targets by the start of 2015. “We would lean to having commitments in the first quarter of 2015 – that is not hard and fast, but a rule of thumb,” said the US head of delegation Todd Stern.

In a statement to journalists EU climate chief Connie Hedegaard said there was broad support from Africa and South America for what is frequently called a ‘pledge and review’ process, where countries could “consult each other, where we know the intended pledges, so that we can study and consider.”

But in what has proved an explosive intervention, Hedegaard added: “there is still a group of like-minded who thinks differently, who tries to reinstall the firewall”, referring to a coalition that includes India, China and Venezuela.

These states appear unwilling to have their emission targets analysed by an international body, and say the developed world must take more action on emissions reduction and finance before they make any promises.

India has also blocked an “equity process” which could determine what levels of cuts would be appropriate, taking into account countries development and historical contribution to levels of pollution.

Earlier this week the EU climate chief accused nameless countries of “backtracking” on the previous understanding that a new deal should be “applicable to all”, regardless of whether they are considered developed or developing by the UN.

In a sign of the high emotions in Warsaw, Venezuelan vice minister Claudia Salerno called Hedegaard’s statement “totally unacceptable” and accused her of negotiating through the media.

“We are forced to answer her accusations to the media, because of the serious allegations she has made,” she said.

“If this process is damaged on this last day because of the incredible outburst by Connie Hedegaard, she has to take the responsibility of damaging this conference

“She’s already damaged one conference,” she added, referring to the Danish Commissioner’s involvement in the ill-fated 2009 Copenhagen summit.

RTCC understands that the atmosphere inside the negotiating chamber where these talks are taking place is now heated, with Hedegaard and Salerno the focal point of both sides.

This growing row threatens to derail what had proved a surprisingly productive day of negotiations, with signs that talks over a loss and damage mechanism were heading towards a resolution.

A central issue surrounds the creation of a separate entity focused on the costs of climatic events, which the EU and USA oppose. Todd Stern told reporters he was “for it” in principle, but it should be addressed under existing structures within the UN climate process.

Sven Harmeling from Care International told RTCC a text released just after lunch on Friday would not be the final version, but said there was room for both sides to compromise.

Separately, agreement has been reached over the measuring, reporting and verification (MRV) of emissions, a contentious issue given the level of scrutiny this will place on how and where individual nations are producing greenhouse gases.

An MRV and financial package has also been agreed for a scheme known as Reducing Emissions from Deforestation and Land Degradation (REDD). This was seen as critical by many analysts, given around 10-15% of global emissions come from the cutting and burning of trees.

Countries acutely vulnerable to climate change were also promised $100 billion to refill the UN adaptation fund, which will help governments prepare for events such as drought, storms or flooding.