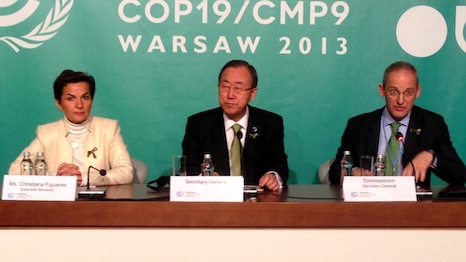 The UN General Secretary said that he “cannot overemphasise the importance of China” in the fight against climate change.

Speaking in Warsaw today, Ban Ki-moon stressed the central role that China, the US and the EU will play in bringing the UN’s climate negotiations to a successful conclusion at the end of this week.

“I really count on Chinese leadership,” he said, and drew attention to a recent pact between China and America on climate change as a good example of cooperation between the world’s largest economies.

He acknowledged that China, the EU and US have “some differences of visions and positions”, but urged them to understand that a “multilateral agreement can be beneficial to their national solutions at this time”.

“We need the developed world to lead this campaign,” he said. “I think they have capacity, they have systems and means. It is necessary and crucial that members of G20 particularly and all the OECD countries, they should lead by example.”

China is not considered a developed country by the UN, but a report released today suggested that 70% of the growth in global emissions has been down to increased emissions in China, reinforcing the crucial role that it must play in any discussions on climate change.

Yesterday, the leader of the Chinese delegation accused the EU’s current greenhouse gas reduction targets of being “not at all ambitious” and stressed the importance of making progress on finance at the current UN climate change negotiations.

Ban called finance the “most important and quickest way” of tackling climate change, and urged developed countries to stay committed to the US$ 100bn that they promised to provide to help developing countries adapt to climate change in 2010.

“Without the financing we cannot carry on,” he said. Ministers from across the globe will spend tomorrow discussing how they can scale up the currently inadequate levels of finance so that the GCF can become operational in 2020.

The level of ambition so far shown is very much inadequate, insufficient at this time,” said Ban, who expressed his hope that what had happened in the Philippines would be a “wake up call”.

“I know every country has domestic constraints and limited resources, but depending on what political priorities are set, the climate change agenda can be much given a much higher political priority.”