Oxfam says developed nations spend up to US$90 billion on fossil fuel subsides, but have slashed climate finance support 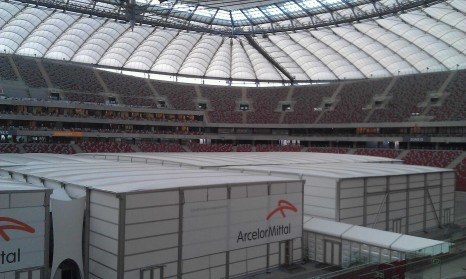 A major UN climate change summit opens in Poland today amid warnings talks could collapse because of a lack of financial support from rich nations.

Oxfam says developed countries are giving more to the fossil fuel industry than to projects in poorer regions focused on cutting greenhouse gas emissions, and are way off meeting a collective promise to supply US$ 100 billion a year by 2020.

It calculates as little as US$ 7.6 billion may have been provided in 2013, with some wealthier countries such as Canada and Australia offering nothing at all. That’s around US$ 24 billion less than was delivered in the previous two years.

And the NGO says the ability of developing nations to build ‘green’ economies that can cope with projected impacts from global warming is being put at risk by this funding shortfall.

“Rich countries must make it clear to poor countries what money is available now and in the coming years to help them adapt to climate change and reduce their emissions,” said Oxfam’s Climate spokesperson, Kelly Dent.

“Uncertainty from one year to the next makes it impossible for vulnerable countries to take the action they need to protect their citizens. This murkiness will only heighten distrust around the negotiating table.”

The flow of finance between developed and developing nations is a running sore point between the two sides at UN talks.

After a brief peak between 2010-2012 when US$ 30bn was delivered to help climate-related initiatives in the Global South, contributions have fallen off sharply [see full breakdown at bottom].

In 2012 the UK committed to doubling its climate finance levels up to 2015, while Germany and France have also offered increases up to 2014.

But elsewhere the picture appears bleak, with the USA’s chief climate diplomat Todd Stern admitting last month that the “hard reality” was funding was unlikely to rise soon.

“The fiscal reality of the United States and other developed countries is not going to allow it,” he said in a speech in London.

“This is not just a matter of the recent financial crisis; it is structural, based on the huge obligations we face from aging populations and other pressing needs for infrastructure, education, health care and the like.”

In a sign of the increasing complexity of these talks, delegates from developing countries say an effective 2015 emissions reduction agreement has to be based on a clear financial package.

“For us, I believe it’s the most critical thing in Warsaw,” Ecuador’s lead negotiator Daniel Ortega told RTCC.

“Talking about finance will allow us to have a large conversation on what we can actually do with regards to mitigation.”

He added: “I’m not personally expecting any commitment by Warsaw. What we need to have is a clear roadmap of how the discussions of financing will allow us to have a clear idea of commitments by 2015.”

Phillipines Climate Commissioner Yeb Sano said poorer nations are tired of excuses, adding that discussions on how to fill the UN’s Green Climate Fund had been avoided at the last four UN summits.

“We not leave Warsaw without concrete pledges on finance – especially in adaptation, because the urgency for adaptation is obvious,” he said.

An expert group on finance chaired by Sano is expected to report back to the conference on potential sources of funding, which could include levies on carbon markets or new taxes in developed countries.

Efforts to increase the share of private sources of finance in the overall funding package have been met with suspicion from potential recipients, but without substantial pledges from donor governments this seems inevitable.

“Whilst we will no doubt get the headline finance pledges from a smattering of countries that tend to accompany each COP, what we really need is a clear pathway to meeting the $100bn a year target,” said PwC’s Dr Celine Herweijer.

“Where are we really now? How do we get to $100bn? And how do we track it, and measure its effectiveness?”

Other key issues at this year’s summit will be discussions over a climate compensation or loss and damage mechanism, and the shape of a timetable for governments to start making emission reduction pledges next year.

Many expect a world leaders meeting set to be hosted by Ban Ki-moon next September is where these national targets could be announced.

Governments will then travel to the Peruvian capital Lima for the major climate summit of 2014, before agreeing on a final treaty text ahead of the 2015 Paris meeting.

The IPCC’s latest climate science report has given this year’s meeting an added sense of urgency, setting a limit on the amount of carbon dioxide that can be released before global temperatures are pushed over the 2C threshold, beyond which warming could lurch uncontrollably towards a possibly irreversible catastrophe.

“We approach the meeting in Warsaw at a pivotal moment in the international process to address climate change. We still have time and the means to limit warming to the internationally agreed 2C target,” said UN climate chief Christiana Figueres.

“But to meet this international commitment, we must respond to what science is telling us. We need to urgently harness all existing momentum and use all the tools we have at our disposal to shift to low – carbon and build resilience to climate change.”