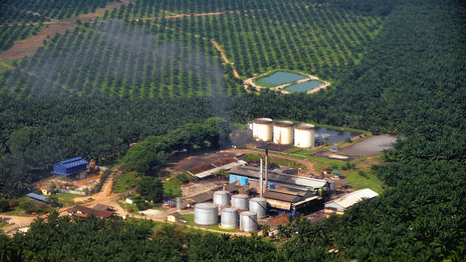 A row over palm oil is brewing between one of the biggest producers and biggest consumers of the product.

The Malaysian palm oil industry has accused the EU of telling “major inaccuracies and untruths”, after it expressed concern last week over illegal logging across South East Asia.

An EU report, intended to strengthen its relationship with South East Asian (ASEAN) countries, highlighted the problem of illegal logging and burning and the “resulting smog that has a significant negative impact across ASEAN borders”.

But the Malaysian Palm Oil Council (MPOC) has accused that the EU of making “politically motivated” attacks on the industry.

The EU is one of the biggest consumers of palm oil, consuming around 15% of global production every year. Malaysia is the second largest producer of the fuel after Indonesia, responsible for 19 million of the total 53.7 million tonnes that was extracted last year.

Palm oil is widely used as a biofuel, but also in products such as chocolate, biscuits and shampoo.

MPOC, the lobby for the Malaysian palm oil industry, aims to “promote the market expansion of Malaysian palm oil and its products by enhancing the image of palm oil”, adding that it aims to do this by raising awareness of its “environmental sustainability”.

But it is a lack of sustainability in the industry that has aroused the EU’s concern. While it is adopted as a clean alternative to fossil fuels, the production of palm oil often comes at the expense of rainforests, which contribute carbon dioxide to the atmosphere when they are cleared to make way for plantations.

Even so-called “sustainable” plantations cause problems, as it leads to the expansion of the industry into other, non-certified areas.

MPOC-run website The Oil Palm repeatedly refers to the “callous attempts” of the western world to “stymie Malaysian development by limiting Malaysian extractive and agricultural industries”.

On the EU’s most recent attempt to tighten agricultural practice, they write in a blog post: “The report is supposed to be a tool for encouraging closer cooperation between Malaysia and the EU.

“In reality, this is a political tool for Members of the European Parliament (MEPs) to make poltiically-motivated [sic] statements about their feelings towards ASEAN countries, including Malaysia…

“[I]t would have been more appropriate to recognize the commitment and actions that has been taken to tackle illegal logging where it has been an issue.

“The aggressive statements in the European Parliament report do not recognise or support this important work.”

Deforestation is an acute problem in the rapidly developing Malaysia, which is the world’s second largest producer of palm oil.

Last June, forest fires caused thick smog crossed over the Indonesian borders into Malaysia and Singapore. They are thought to have been caused by illegal burning practices taking place on agricultural land.

A recent study using advanced satellite images found that 80% of Malaysian rainforests had been degraded through logging, with the network of roads built through the country allowing for repeated cycles of logging over a short period of time.

This is in spite of a commitment made by the Malaysian government to the United Nations at the 1992 Rio Earth Summit to maintain at least 50% of its land as forest cover.

Reinhard Bütikofer MEP, who led the report committee, acknowledged that producers had taken steps to improve practices through initiatives like the Roundtable for Sustainable Palm Oil, but said it was not enough.

“I would nevertheless refer to the analysis of human rights and environmental protection organisations which criticise that these measures fail so far to curb the speed of primary forest destruction.”

In its report, the EU calls for European companies and banks involved in palm oil production to help “develop measures to increase international and local law enforcement capacities”.

“Europe clearly has a responsibility not to continue satisfying its hunger for resources in destabilising eco- and social systems in the ASEAN region,” said Bütikofer.

“We should work together on solutions that would allow the palm oil exporting countries to continue thriving while at the same time making sure that an equilibrium is being found to preserve the natural habitat.”

According to a report from the International Institute of Sustainable Development, the EU increased its overall consumption of palm oil by 40% between 2006 and 2012.

The biofuel industry in particular has grown increasingly dependent on the fuel, increasing its consumption by 365% over the same period, while government policies stimulated growth in the sector. Recognising the environmental impacts of biofuels, MEPs voted for a 6% cap on the amount that can be used in the transport fuel mix by 2020.

Bütikofer added: “I simply believe: everybody should clean their own yard first. The EU needs to improve measures on sustainability in many of its policy areas.

“On the other hand, Malaysian legislation also has to stand up to scrutiny by the public and to a transparent evaluation of its effects on the ground.”