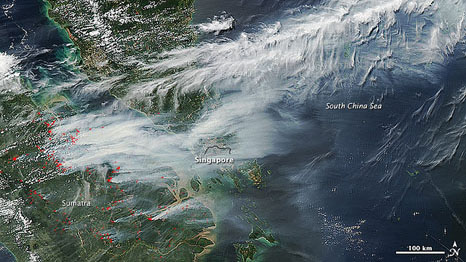 Smog created by the fires in Indonesia swept across into Singapore and Malaysia (pic: NASA goddard)

It has been hard to apportion blame for the forest fires that swamped Indonesia, Malaysia and Singapore in hazardous levels of pollution in June this year.

While suspicion for the fires has fallen on the large pulpwood and oil palm companies, the lack of transparency of government maps has so far prevented a definitive answer to the question of who was responsible for the fires.

But a new interactive map put together by researchers working in the region is providing more accurate visualisations of where the fires occurred – and the large industries operating in the forests appear to have got off lightly.

The maps show that 79% of the burning took place on small and medium holdings, while only 21% took place on industrial plantations.

This is still a significant proportion of the fires, especially since the practice is illegal in Indonesia under the government’s regulations on the Protection and Management of Environment, and many individual companies claim to have a ‘no burning’ policy, which is a prerequisite for any member of the Roundtable on Sustainable Palm Oil.

Nonetheless, it is a long way off the two fifths of the fires that WWF predicted based upon their own monitoring of the situation.

“When a fire hits, everyone is going ask how much land has burned and who did it?” said David Gaveau, the scientist at the Centre for International Forestry Research (CIFOR) responsible for developing the map.

He told RTCC, “Those recent fires caught everyone by surprise. No-one had predicted them. They are abnormal compared to historical trends, as big fires in Indonesia usually appear in September-October and again in February-March, but not in June.

“So, when we heard that Singapore and Malaysia were engulfed by record pollution coming from fires in neighbouring Sumatra Island, Indonesia, we immediately decided to research the causes of these new fires.” 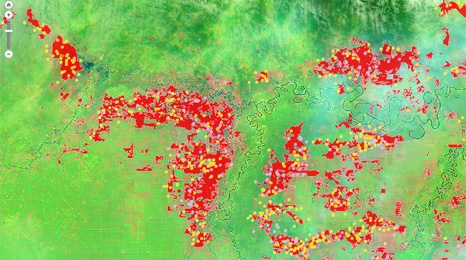 Poor enforcement of the regulations prohibiting slash-and-burn land clearances in Indonesia means that, for many small landholders, it is still the cheapest method of clearing the land to make way for oil palm plantations.

While the Indonesian government launched investigations into eight large companies they suspected of starting the fires, the companies themselves insisted that it was the smaller farmers who had continued to use slash-and-burn as a cheap method of clearing the land.

The official government maps are closely guarded and, as the researchers as CIFOR have shown, inaccurate. This has so far made it difficult to prove either claim.

With these satellite images, anyone can see the exact extent of the burning that took place.

Positing that the regular, gridlike patterns were the industrial plantations and the more irregular areas belonged to the smaller landholders, the scientists concluded that most of the fires had started outside of the land owned by the larger companies.

Gaveau said, “A number of activists pointed fingers at some of the world’s largest pulpwood and oil palm companies.

“These accusations have relied on superimposing the fire alerts with government maps of licensed plantation area, but the companies said that the government maps were inaccurate, and that the land effectively controlled by companies had not had fires within them.

“Because accurate land use maps are not public domain, we sidestepped the problem by examining LANDSAT images to identify large, rectangular blocks of agricultural land, characterizing lands controlled by companies.”

Field investigations will still be required to understand the exact cause of the fires. It remains a possibility that fires started within the smaller plantations

The maps also demonstrated that most of the land that had been burnt by the fires had only recently been cleared, suggesting that the fires are part of the process of new plantation establishment.

“Our maps also show that much of the vegetation that has burnt was not natural forest, although half of the areas that burnt were actually forest only five years ago, and therefore had recently been cleared,” said Gaveau.

They also showed that the fires had affected areas under protective government moratorium, and burnt mostly on peatlands.

When burnt, peat releases an enormous amount of carbon dioxide, and thus these kinds of fires have huge implications for climate change.

In 2005, peat fires were the single largest source of greenhouse gas emissions in Indonesia, accounting for about 40% of emissions overall.