US emissions fall to lowest level since 1994 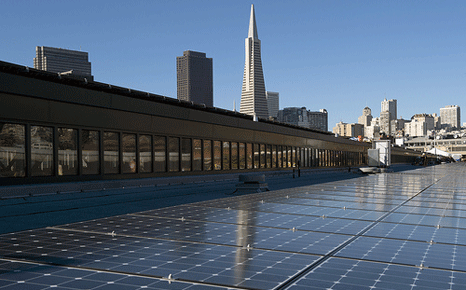 US energy related CO2 emissions are at their lowest level since 1994 having declined 3.8% in 2012, according to government figures.

“However, emissions would have increased by about 143 MMTCO2 if the energy and carbon intensities had not decreased at the rates they did.”

The fall has been attributed to a warm first quarter of 2012 which lowered energy demand and therefore emissions.

The residential sector electricity consumption was lower in 2012 when compared to 2011 falling by 3.4% which the report says could be due to increased energy efficiency products due to falling costs.

After the residential sector, the next biggest decline in energy consumption was in the transportation sector (513 trillion Btu) or 22% of the total energy decline.

Vehicle miles travelled in 2012 were flat compared to 2011 (8,072 million miles per day in both years), while more energy-efficient vehicles are continuing to enter the market.

About 140,000 plug-in EVs are on U.S. roads, short of President Barack Obama’s goal for 1 million of the cars by 2015, data from the Electric Drive Transportation Association shows.

But fears the batteries will die and limited options is holding up demand for electric vehicles nationwide, both in rentals and sales.

A major factor in the CO2 emission reduction was shale gas, which, with the continued displacement and retirement of coal plants, has the potential to provide even more CO2 reduction benefits in the future.

According to a recent IHS Global Insight report, shale gas currently accounts for approximately 37% of total natural gas production in the US compared with just 2% in 2000.

The public support of shale gas, compared to other countries like the UK, is unsurprising when market research companies are throwing around figures like $2,000 will be added to an average American’s household income. 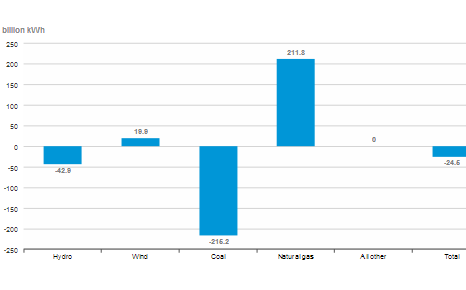 The use of coal has decreased as much as natural gas has increased. (Graph: EIA)

Three months ago, President Barack Obama launched his 21-page Climate Action Plan which will use existing Executive powers to target emission levels, bypassing the need to gain approval from Congress, which has repeatedly blocked efforts to tackle climate change.

For the first time existing gas and coal fired power plants, which account for 43% of US emissions, will face tougher pollution limits set by the Environmental Protection Agency (EPA).

The report concluded: “It is difficult to draw conclusions from one year of data. Specific circumstances such as the very warm first quarter of 2012 and the large increase in natural gas-fired generation relative to coal contributed to the significant decline in emissions in 2012. Other factors, such as improvements in vehicle fuel efficiency and increased use of renewable generation, however, could play a continuing role in subsequent years.”