Saudi Arabia is leading calls for climate change to be omitted from the UN’s 2015 Sustainable Development Goals (SDGs).

At an SDG meeting in New York last week attended by over 70 nations the Saudis, together with fellow oil producers Venezuela and the UAE called for discussions of climate change to be separated from those on energy.

The three nations feature in the top seven of proven oil reserves worldwide, and have opposed targets to encourage clean energy over fossil fuels, despite evidence that climate change will exacerbate global hunger and poverty.

“Saudi Arabia don’t want climate change in the same session yet alone the same day as energy. They don’t really want it in there at all,” Stakeholder Forum’s Farooq Ullah, who attended the meeting, told RTCC.

“They oppose climate and energy being associated with one another and say energy [targets] should only deal with energy access, which clearly indicates they don’t want to set goals around the sustainability of the source of energy,” he added. 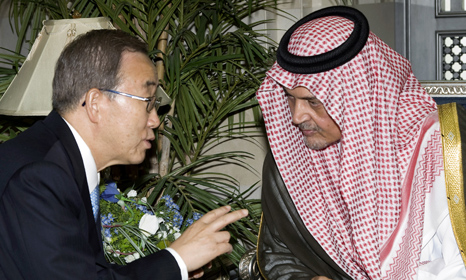 Saudi Arabia has a history of blocking attempts to cut fossil fuel use at the UN (Pic: UN)

The SDGs were established at the Rio+20 summit and are set to replace the Millennium Development Goals (MDGs) which end in 2015.

Their main objective is poverty alleviation but the focus on sustainability could add momentum to climate-friendly development at a time when countries are starting negotiations over a legally binding emissions deal also set to be agreed in 2015.

“Climate change is going to be a struggle in the SDGs in general because of the UNFCCC, the UN’s climate change body,” said Ullah.

Saudi Arabia, Venezuela and other big oil exporters have already gained reputations as serial blockers at the these talks, which are at a delicate stage. Discussions outside of this forum can make some nations uneasy – as evidenced by China’s objections to climate being discussed at the UN Security Council.

Renewable energy lies at the heart of the SDG problem, but resistance to its inclusion in UN sustainability discussions is not new.

The UN Framework Convention on Climate Change (UNFCCC) focuses on emissions and does not bind countries to clean energy sources. While many nations in the Gulf are investing in renewables at home and abroad, they fear any global agreement that could see the value of their reserves plummet.

“The international recognition that sustainable development cannot be achieved without renewable energy is not in the interest of Saudi Arabia, Venezuela or any other oil exporting countries,” Andrew Scott of the Overseas Development Institute (ODI) told RTCC.

“Those countries have consistently in the UN for a tried to ensure that recognition doesn’t take place. I recall in round 1997 the UN Commission for Sustainable Development was debating energy. They failed to agree on a final document and one of the reasons was the insistence, particularly by Middle Eastern states, not to include anything that suggested renewable energy was the pathway to go down for sustainable development,” added Scott.

Ullah agrees, observing that without any progress in the main strand of UN climate talks it’s difficult to see how other diplomatic avenues can succeed.

“It will be hard to set a meaningful ambitious target while the UNFCCC remains inconclusive. They won’t want to trump the UNFCCC. So what can they do at the SDGs,” he said.

“The UK position is that climate change shouldn’t be a goal in its own right, but the drivers of climate change could be addressed in the other goals on food, water and energy. Having a discrete climate goal is not necessary.”

The content is still being hammered out by 30 small negotiating troikas that make up the Open Working Group (OWG) on SDGs.

The UK position could be interpreted as mainstreaming climate change into the goals, but Ullah warns that could be a polite way of sweeping the issue “under the carpet”.

The UK recently blocked climate change from the G8 talks but a spokesperson for Prime Minister David Cameron told RTCC that the Prime Minister remained committed to sustainable development as a concept.

“The PM believes that overarching focus of the post-2015 agenda must be to end extreme poverty but this will not be possible without promoting sustainable development,” they said.

Ban Ki-moon has taken a personal interest in the SDGs. His office is spearheading a Sustainable Energy For All (SE4All) initiative and the UN will host a climate change summit for heads of state in 2014.

He has already expressed frustration with the slow progress of the UN’s climate talks and could view the goals as another means to build momentum.

“In September we expect Ban Ki-moon to bring the High Level Panel and the OWG’s work together with the OWG taking the work to its conclusion and he could insist at that point that climate is in the mix. We can’t know for sure,” said Clare Coffey, ActionAid.

Coffey stresses that the SDG process is not about writing a treaty like the UNFCCC, and is instead drawing up “soft” policy targets. This means it cannot put binding obligations on governments but it can draw interest to issues, boost the profile and provide a platform to “ratchet up” negotiations.

“The MDGs attracted attention and resources so you can’t write the SDGs off as purely symbolic,” said Coffey.

What are the sustainable development goals?

The SDGs were conceptualised at the Rio+20 summit with the expectation that they will replace the MDGs from 2015 onwards.

The Rio+20 summit, largely deemed a failure despite a total of $513bn being pledged for a number of development and environmental projects.

Work on the SDGs is currently be driven by the OWG while efforts to replace the MDGs have been carried out by Ban Ki-moon’s High Level Panel on Post 2015 development.

The panel is co-chaired by the UK Prime Minister David Cameron and the Presidents of Indonesia and Liberia, Susilo Bambang Yudhoyono and Ellen Johnson Sirleaf respectively.