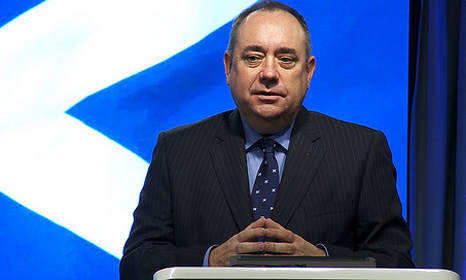 Alex Salmond is keen to push for ambitious climate targets while relying on North Sea gas and oil for funding (Pic: Scottish Govt)

Robinson’s foundation defines climate justice as linking “human rights and development to achieve a human-centred approach, safeguarding the rights of the most vulnerable and sharing the burdens and benefits of climate change and its resolution equitably and fairly.”

At the heart of the event’s agenda lies the troubling ethical question at the centre of the climate challenge: how can countries make the transition to a low carbon economy in a fair and sustainable way?

It’s sensitive when you consider that total emissions from the 100 poorest and vulnerable countries account for less than 5% of global emissions, leaving the other 68 countries in the negotiations responsible for the remaining 95%.

Scotland’s government says it is doing its bit in terms of mitigation, highlighting the disparity between its goal of 42% emissions reductions by 2020 and the current impasse at UK level over the state’s wider low carbon strategy.

And in contrast to Prime Minister David Cameron’s virtual silence on climate change, Salmond has gone out of his way to champion the issue, saying it should be “at the very heart of the decisions we make on energy policy and economic and social development”.

Last November the country’s £3 million Climate Justice Fund announce its first investments in five projects based in Malawi and Zambia.

It is tiny compared to the UK’s International Climate Fund commitments of £3.87bn up to 2015, but some analysts say the design of Scotland’s CJF makes it particularly impressive, given its primary aim is to facilitate resilience measures in vulnerable countries.

“Scotland is ahead of any other country in seeking ways to achieve this by linking international development programming with management of the Climate Justice Fund,” says the IIED’s Simon Anderson.

“To tackle climate change on a global scale, we need genuinely ‘just’ funds whose private sector contributions dwarf those from government budgets,” he adds.

An IIED briefing paper Anderson has produced ahead of Wednesday’s summit indicates a well-run Scottish fund benefitting from private finance would give the country a higher profile, and recognition that it ‘punches above its weight’ on the international scene.

“If the fund is well designed, effectively implemented and its impact well documented it will be recognised as a pioneering precedent,” he writes.

Further grants of between £400-500k are expected to be released by the CJF over the next two years, and last week the government also announced plans to offer an extra £10.3 million to help communities across Scotland cut their carbon footprint.

The fund offers a backdrop of a genuinely positive low carbon picture in Scotland, embellished by the recent news that energy from the country’s renewables sector displaced almost all emissions from its road and rail network in 2012.

The Scottish Government’s target is to meet the equivalent of 100% of gross annual electricity demand from renewables by 2020.

Yet it remains unclear how a country that relies heavily on oil and gas extraction can declare itself a green pioneer.

The relentless pursuit of fossil fuels from the North Sea shows no signs of dimming, described by one Scottish campaigner as a “jarring contradiction”.

A 2012 Guardian analysis revealed Scottish energy policies could release up to 10 billion tonnes of CO2 into the atmosphere.

That’s a significant figure, given last week’s IPCC report warned 840 billion tonnes can be burned if the world is to have a 50% chance of staying within the 2C warming target agreed by countries in 2009.

In the past Alex Salmond has spoken of oil-rich countries having a “moral obligation” to invest in green energy, but the former oil economist is also on record as wanting to follow Norway in establishing a ‘sovereign wealth fund’ from North Sea revenues.

At some point the First Minister will have to decide where he stands.