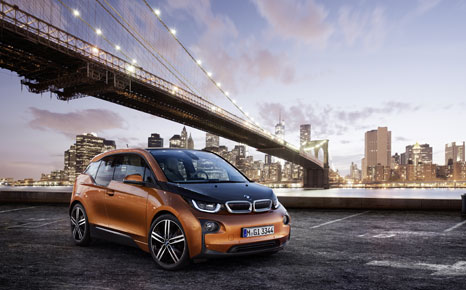 BMW has been recognised as market research company Frost & Sullivan’s 2013 Global Company of the Year establishing it as a sustainable and innovative auto manufacturer.

Cars like the BMW’s i3 and i8 represent the future of mobility and mark significant strides towards a future of fully integrated mobility solutions.

Sarwant Singh, senior partner at Frost & Sullivan told RTCC that although it was a close decision between BMW and competitor Daimler, BMW stood out because it had created a wholly innovative brand new car from conception through to completion.

“One of the key drivers for us was how they [auto manufacturers] looked at future trends. Instead of developing cities around cars, they’ve [BMW] gone and built a car around a city, which is a first in the industry.”

The BMW i3 has been designed as a competitively priced emission-free electric motor to be launched at the end of this year. On the other hand, the i8 is a hybrid sports car which can run for 35 kilometres on electric power and uses less than three litres of fuel every 100 kilometres.

AlphaCity was the first corporate car sharing programme to be launched globally.

This business model combines car sharing and leasing to improve employee mobility and reduce the number of cars on the road.

Verena Stewens, spokeswoman for BMW told RTCC: “The Frost & Sullivan Award was an encouraging sign that showed us that our strategy is meeting the demands of the present and is bringing mobility onto the next level.

“As you can see, electric vehicle research has been a focus of the BMW Group in the past years, and we will of course continue to work on alternative drives in the course of our BMW Group Efficient Dynamics Strategy.”

Contrary to its seeming enthusiasm to go green, in June BMW was accused of trying to dampen EU negotiations to introduce new car pollution limits.

German Chancellor Angela Merkel was said to have blocked its progress because she did not want to be seen harming the German car industry so close to the elections which took place at the weekend.

One Brussels insider told RTCC during the negotions: “BMW’s influence with the [German] government is very strong – it’s incredible”.

Similarly, a recent study into whether a loophole in the EU’s emissions cap legislation was being taken advantage of by manufacturers like BMW and Daimler was released last week.

The report said that “improvements to [fuel efficiency] reported by BMW, Daimler and General Motors appear to be primarily attributable to the flexibilities in the testing procedure, with real world improvements in fuel economy likely to be far less than those reported on the basis of vehicle tests.” it reads.

Despite the bad press, BMW i opened i showroom to be dedicated solely to electric mobility last year in London.

Singh queried: “Is being electric important? We believe it is. Look at Tesla. They [are] number one in quality and their sales are shooting up.

“I think electric drive is an important differentiator for today and for the future.”