Researchers find flights covering area near Solomon Islands produces most ozone, as EU limits its ETS to own airspace 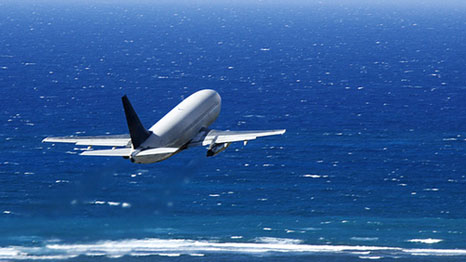 Not all flights are equal where pollution is concerned. According to a new study, aircrafts from Australia and New Zealand have a higher environmental impact than their European counterparts.

The study, carried out by researchers from the Massachusetts Institute of Technology and published in the journal Environmental Research Letters, calculates the amount of ozone created by kilogram of fuel burnt on the journey.

It finds that a certain area of the Pacific, around 1000km to the east of the Solomon Islands, has a high level of sensitivity to aircraft emissions – five times greater than sensitivity in Europe, for instance, and 3.7 times higher than in North America.

Ozone is a potent greenhouse gas with comparable short term effects to carbon dioxide. The volume emitted by each aircraft is not absolute, but depends on the sensitivity of the atmosphere where it flies.

This means that the impacts of ozone are felt in specific regions at specific times, rather than on a global scale. For instance, the researchers found October flights to be 40% more polluting than April ones.

Lead author of the paper, Steven Barrett, said: “Our findings show that the cleanest parts of the atmosphere exhibit the most dramatic response to new emissions. New emissions in this part of the Pacific will result in a relatively larger response from the atmosphere.”

The researchers estimated that flights going through this region will result in an extra 15kg of ozone being produced each year for every 1kg of nitrogen oxides emitted by the aircraft.

Each of the ten highest ozone producing flights have origins or destinations in New Zealand or Australia, with the most polluting flight of all being from Sydney to Bombay, India. This is because the majority of the flight passes through the area of heightened ozone sensitivity.

These findings are particularly timely, considering the heated international discussions taking place this month around the politically controversial of aviation emissions.

ICAO, the UN aviation regulatory body, met this month to decide on a policy to curb pollution from the heavily polluting industry.

On Wednesday, members of the council met to decide on a text to take forward to the General Assembly, which kicks off on the 24 September. The text proposes that states should come together to propose a global deal on a trading scheme for the carbon emitted by aviation.

But it is unclear – not to mention politically contentious – how the emissions would be doled out among individual countries.

The EU proposed its own trading scheme, where airlines would have to account for every kilogram of CO2 produced for all flights either entering or departing from the EU, but ‘stopped the clock’ on this to allow political breathing space for a global deal to be negotiated.

In what some have seen as a disappointing compromise, it has now emerged that the EU will scale down its emissions trading scheme in exchange for a pledge that a global market based mechanism will be decided in 2016.

Under this pared down trading scheme, flights only have to account for the emissions produced by aircrafts in EU airspace, meaning that airlines can continue to pollute freely over the oceans and foreign airspace – including the sensitive area over the Pacific.

“The places that the sensitivities are highest now are the fastest growing regions in terms of civil aviation growth,” says Barrett, “so there could potentially be ways to achieve significant reductions in the climate impact of aviation by focusing on re-routing aircraft around the particular regions of the world where ozone formation is highly sensitive to NOx emissions.

“Of course, longer flights are going to burn more fuel and emit more CO2, so there will be a trade-off between increasing flight distance and other climate impacts, such as the effect of ozone.

“The scientific underpinning of this trade-off needs further investigation so that we have a better understanding and can see whether such a trade-off can be justified.”