Currently half of the EBRD’s energy portfolio supports fossil fuels, which includes US$1 billion in past financing for coal 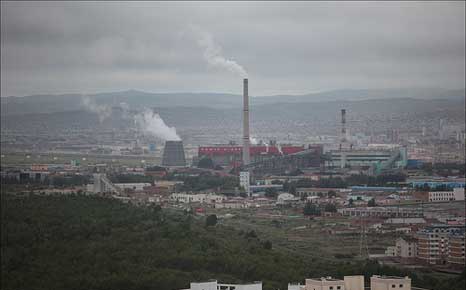 The EBRD invests in energy projects around the world – like this one in Mongolia. (Pic: Ludovic Hirlimann)

Pressure is growing on the European Bank for Reconstruction and Development (EBRD) to agree tighter regulations on its funding of new coal power plants.

A series of consultations on the EBRD’s draft energy policy are taking place this week. Currently half of the EBRD’s US$8.9 billion energy portfolio supports fossil fuels, which includes US$1 billion in past financing for coal.

The bank recently drew up new guidelines that propose an emissions cap of 550 grams/kWh, meaning that the only new fossil fuel plants it is likely to support will be natural gas, but campaigning groups say it has not ruled out future support for coal.

“These projects will lock in polluting emissions for decades to come”.

Over 17,000 people have signed a joint NGOs’ petition to the EBRD to end its investment in coal, which will be delivered this week.

WWF’s global petition to all major investors, including the EBRD, has been signed by more than 40,000 concerned people asking for greater investments in clean, renewable energy.

The World Bank and European Investment Bank both announced this year they are suspending finance for coal powered plants.

European NGO Bankwatch says that between 2006 and 2011, while the current energy policy of the EBRD was in place, the bank’s annual coal lending increased from 60 million to 262 million euros.

An EBRD spokesman told RTCC that the bank’s proposed new energy strategy is a radical improvement on this.

“Specifically it [the draft] says that we will only finance such a plant if it is the least carbon intensive of the realistically available alternatives.

“We recognise that coal presents a major issue for the climate and in most cases we turn down the coal projects we are asked to finance.”

The bank has already invested €8.3 billion (US$11 billion) to 161 direct operations in the energy sector. These received 40% of all financing under the bank’s Sustainable Energy Initiative, which also includes coal projects.

“Coal is a critical concern,” said the spokesman. “However it is actually a small part of our activities in this sector and for most of our countries of operation it simply isn’t an issue.”

Comments on the draft energy strategy should be submitted to the EBRD before the deadline of 30 September.